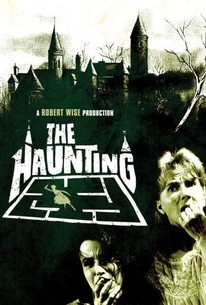 Critics Consensus: Both psychological and supernatural, The Haunting is a chilling character study.

Critics Consensus: Both psychological and supernatural, The Haunting is a chilling character study.

Critic Consensus: Both psychological and supernatural, The Haunting is a chilling character study.

Anthropology professor Richard Johnson investigates reports of psychic phenomena at a "troubled" New England mansion known as Hill House. He is joined by Julie Harris and Claire Bloom, women of radically different temperaments who share a common gift for ESP. Cynical Russ Tamblyn, who stands to inherit Hill House, goes along with the paranormal investigators, hoping to get a few laughs. He doesn't -- nor does Harris, the person most adversely affected by the various ghoulies, ghosties and things that go bump in the night which reside throughout Hill House. Both Julie Harris and Claire Bloom insist to this day that they experienced genuine ghostly disturbances during the filming of The Haunting. Conversely, director Robert Wise noted that he wanted to undergo a paranormal experience, but never did.

Janet Mansell
as Abigail at 6

Amy Dalby
as Abigail at 80

Rosemary Dorken
as Companion
View All

News & Interviews for The Haunting

View All The Haunting News

Critic Reviews for The Haunting

Wise brilliantly uses black and white widescreen to strand his characters in odd-shaped rooms or corridors, making the watcher's eye skitter frantically over the letterbox screen to catch every ingeniously rendered detail.

When The Haunting digs into the internals of its story, summons its spirits and lets them play havoc with cold reason, it has a power and fervor unmatched by any film ghost stories.

People stare about in terror and squeak: 'The house, it's alive!' The picture, it's dead.

The artful cinematic strokes of director Robert Wise and staff are not quite enough to override the major shortcomings of Nelson Gidding's screenplay.

Pretty effective when it came out; it may be a little stiff in the joints by now, but it's still a much better scare show than the recent stinker remake.

The Haunting is a genuine thriller, directed and acted superbly.

The Haunting eventually moves into a static midsection that grows less and less interesting as time progresses...

The horror stories filled with monsters and dripping blood are just kid stuff in comparison with this skillfully made thriller.

For the possible overuse of internal monologues and Julie Harris' overwrought but riveting performance as Eleanor, The Haunting still stands up as a relevant and effective study of both the psychology and parapsychology of its themes.

...one of the most fascinating aspects of The Haunting is the multiple interpretations available for many events, which might be supernatural, or might be the product of a disturbed mind or distorted perceptions.

This is one of the best supernatural chillers ever made.

Audience Reviews for The Haunting

One of the best ever and perhaps the template for the haunted house genre. A scientist wants a team of "experts" to verify if a celebrated haunted house is the real deal or what. Robert Wise gets his scares with sound and weird camera angles, shadows and music. There's no buckets of red corn syrup, no chopping of body parts, no unkillable killing machine with a fetish for William Shatner facemasks, only the hint of something out of reach in the dark. And it has stood the test of time. Richard Johnson's English scientist whispering his lines does some considerable spooky damage as well. Julie Harris' voiceover is only a tad annoying, but bearable in the overall scheme of things.

A sophisticated Gothic tale that doesn't show us anything that would actually frighten us to death but still manages to create an eerie sense of dread as it probes into the psychological and emotional unbalance faced by its protagonist and blurs the line between reality and illusion.

It's Robert Wise so it's not hack but I found this film very uneven. Two powerful actresses completely overshadow dominate over two crap male actors. Unfortunately they men get half the dialogue. There's a lesbian thing, there's and female postponed adolescence hysteria thing, there's guilt over a parent's death, there may be ghosts. Oh and there's a house. Eh, maybe horror's just not my bag.