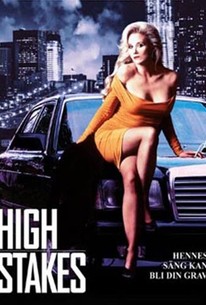 Sally Kirkland stars as a good-hearted hooker named Bambi Rose in this odd crime-drama from director Amos Kollek. Bambi is getting a bit long in the tooth, and is at the mercy of a sadistic pimp named Slim (Richard Lynch), who has his fingers in nearly every sort of crime imaginable. When a greedy Wall Street stockbroker (Robert LuPone) shows up on her doorstep after being mugged, Bambi enlists his aid in ripping off Slim and saving her daughter from a life of vice. More interesting than the film is the cast, which -- aside from including some fine performances from Kirkland and Lynch -- features such future luminaries as Kathy Bates and Sarah Michelle Gellar (credited as Sarah Gellar).

William Kennedy
as Man in Backroom

Maggie Wagner
as Woman in Bar
View All

There are no featured reviews for High Stakes at this time.