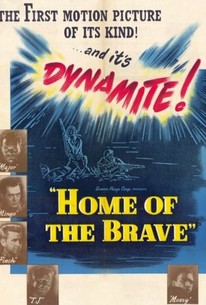 Critics Consensus: Home of the Brave is a powerful portrayal of the soldier's life, a strong indictment of discrimination, and above all an engaging, well-acted drama.

Critics Consensus: Home of the Brave is a powerful portrayal of the soldier's life, a strong indictment of discrimination, and above all an engaging, well-acted drama.

Critic Consensus: Home of the Brave is a powerful portrayal of the soldier's life, a strong indictment of discrimination, and above all an engaging, well-acted drama.

Home of the Brave Photos

Arthur Laurents' play Home of the Brave concerned a paralyzed Jewish war veteran who begins to walk again only when he confronts his fear of forever being an "outsider." The film version of the Laurents play changes the protagonist into an African-American, played by James Edwards. The soldier's comrades include his lifelong white friend Lloyd Bridges, whose death leaves Edwards racked with guilt; redneck-bigot corporal Steve Brodie; and troubled sergeant Frank Lovejoy. In the film's crucial scene, the doctor Jeff Corey forces Edwards to overcome his paralysis by yelling a racial slur; from this point on, Edwards will never again kowtow to prejudice. As corny and condescending as it may sound, Home of the Brave is one of the few films produced during the late-1940s "tolerance" cycle that plays as well today as it did when first released. ~ Hal Erickson, Rovi

Cliff Clark
as Colonel
View All

Critic Reviews for Home of the Brave

Edwards is a sensitive actor and a strong, stalwart man. But the character of Mingo as played by Lovejoy has depths and silences and understanding that will make it memorable.

It's comparatively seldom that one gets to hang the adjective "great" on a motion picture without feeling like a press agent, but here's a case where it belongs.

For all its faults, the film has novelty, emotional wallop and the excitement that comes from wrestling with a real problem, rather than fencing with a cooked-up plot.

Hollywood has recently shown itself aware of the dangers of racial discrimination and persecution, and Home of the Brave is the most absorbing and honest film it has yet made on a difficult theme.

James Edwards, who plays Pete Moss in the film, does a really first class lob.

A picture like Home of the Brave... restores a movie-goer's faith in Hollywood.

Although the picture underlines a social problem, it primarily has been fashioned for entertainment and as such is a first-class job that mounts to moments of raw power and excitement.

The makers of Home of the Brave have succeeded in probing into the minds and souls of a small group of representative American soldiers to find a telling story of the bitter fruit reaped by those who are the victims of race prejudice.

In Home of the Brave a formula has been achieved that combines entertainment value with sound racial approaches.

Taking a stand that has never before been recorded in the history of Hollywood [is] Brave, and a brave film it is.

At last, Hollywood has come of age (or, at least it is in the process) with Stanley Kramer's ingenious and adult treatment of the anti-Negro question, which, until now, has been a mere suggestion here and there.

In addition to its special theme, the photoplay is one of the best studies of soldiers under fire ever made.

Audience Reviews for Home of the Brave

There are no featured audience reviews yet. Click the link below to see what others say about Home of the Brave!

Home of the Brave Quotes