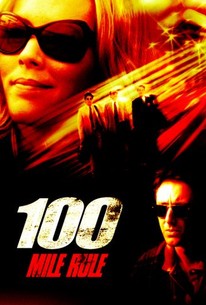 Following in the vein of (Roger Dodger and In the Company of Men), director Brent Huff presents a crash course on the relationship between sexual and corporate power plays in The 100 Mile Rule. The infamous rule states that one is well within his rights to sexually indulge himself with someone other than his wife or girlfriend, provided that he is more than 100 miles away from home. This so-called rule becomes a topic of hot debate when a couple of Detroit salesmen must attend a business trip. Jerry (David Thornton) is a vocal supporter of the rule, although most of his attempts to utilize it are met with contempt and disregard. Bobby (Jake Weber), however, is a family man who staunchly resists joining his friends in their visits to various escort services, strip joints, and porn shops. Unfortunately for everyone involved, Bobby falters and allows himself a sexual encounter with Monica (Maria Bello), a beautiful cocktail waitress. It turns out, however, that Monica demands payment for her services, and she has videotaped Bobby in bed with her. Although Jerry admits he orchestrated the entire thing due to a high-profile customer he had lost to Bobby, the two salesmen end up seeking advice from their senior manager Howard (Michael McKean), who has seen it all before.

None of it is that funny or suspenseful, and all the characters are far from sympathetic.

...it's hard to really dislike a flick in which a beating is administered with a sack full of oranges.

I was more than 100 miles away from home when I saw this movie, so I wasn't sure if it counted... The more bizarre the situation gets, the funnier it is - with 'movie violence' and classic physical comedy.

Always quite funny and sometimes even a bit sinister.

I really don't know what to say about this comedy directed by Brent Huff. A story presented as a dark comedy about three salesmen from Detroit who come to Los Angeles for a two week seminar and get themselves involved in a world of trouble when their 'fun' snowballs into a roller-coaster ride of secrets, guilt, peer pressure and stupidity, was funny at the moments! Away from their wives and children, Bobby, Jerry and his boss Howard are tempted by beautiful women and alcohol in the hotel bar. Bobby, a family man, tries to avoid the "rule 100 miles" (if you are within 100 miles of your home, you are free to do as you please). While Jerry and Howard spend their free time chasing girls, Bobby is dedicated to spend some time with the outdoor sporting activities. There he meets Monica, a gorgeous hotel maid... Screenplay had its moments, that is a fact, but altogether wasn't fulfilling... still, I could not give it a lower rating than 60% because I did laugh. Casting wasn't perfect but Jake Weber, Maria Bello, David Thornton, Michael McKean, Nick Chinlund and Shawn Huff, did enough not to be blamed. Nothing special, but good for lonely nights.