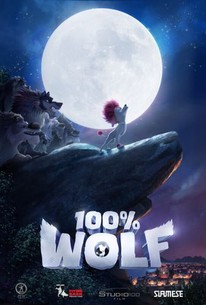 The story of 100% Wolf centers on Freddy Lupin, the heir to a proud family line of werewolves. Desperate to become a werewolf himself, Freddy is in for a shock when on his 13th birthday his first "transwolfation" goes awry, turning him into a ferocious ... poodle. Just when Freddy thinks life can't get any worse, he's groomed against his will, chased into the streets and thrown into dog prison. Can Freddy and his new streetwise friend, Batty, escape? Who is the sinister man following his every move? Despite his pink and fluffy exterior, can Freddy prove he's still 100% wolf?

100% Wolf will leave you howling - not with laughter or delight but in despair for some semblance of a plot in its mercifully short run time.

The film rockets along, but there's nothing hasty or half-hearted about its style. It's packed with witty visual gags, enhanced by classy lighting, and its large cast -- human, lupine and canine -- are graced by an inventive set of eccentricities.

Not destined to become a classic like the movies that inspired it, but as an agreeable time-waster for kids who miss going to the theatre, it's a howl.

Show it to your kids, your nieces, your nephews, and get them hooked on a dog bone-afide Aussie animation treat.

Half of the film is full of cliches and the other is actually making decent attempts to reach adults and children. [Full Review in Spanish]

Innocuous but highly derivative... a barely tolerable diversion for the younger set, though even they will find it awfully familiar.

[The film allows] the visuals to supply the coming-out metaphor even if the script can't quite work up the courage to underline it.

t's forgettable fluff, enough to keep the pups entertained without driving their parents to distraction, though you can take comfort that if you're one of those cinema-forswear-wolves, you won't be missing much.

While adults might cry "cliche", youngsters are likely to fall in love with the familiar fairy tale elements, which are given a dash of modernity.

There is hell of a lot of helter skelter and frantic movement to be done before such questions are resolved in this appealing moonage nightmare, which, yup, ends happily.

There are no featured reviews for 100% Wolf at this time.