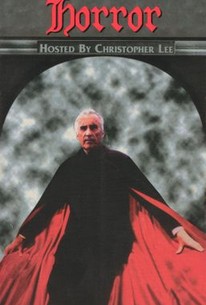 Condensed from the 13-episode series directed by Ted Newsom and hosted by horror movie star Christopher Lee, 100 Years of Horror, the two-hour version, is a celebratory overview of the Hollywood horror genre, rich with film clips from horror movies throughout most of the 20th century. Stars getting screen time here include old masters Boris Karloff, Bela Lugosi, and Claude Rains, as well as The Omega Man himself, Charlton Heston, Halloween babysitter Jamie Lee Curtis, and horror dabblers Robert De Niro and Kenneth Branagh. The program includes interviews with directors Roger Corman, Joe Dante, John Carpenter, and Herschell G. Lewis, and with actors (host) Christopher Lee, Peter Cushing, and Claude Rains. Highlights include outtakes from the surprisingly effective Abbot & Costello Meet Frankenstein (1948) and from the 1960 version of The Lost World.

Brinke Stevens
as Herself

Fred Olen Ray
as Himself

Christopher Lee
as Himself (Narrator)

Critic Reviews for 100 Years of Horror

There are no critic reviews yet for 100 Years of Horror. Keep checking Rotten Tomatoes for updates!

Audience Reviews for 100 Years of Horror

There are no featured audience reviews yet. Click the link below to see what others say about 100 Years of Horror!