The Hunchback of Notre Dame1923 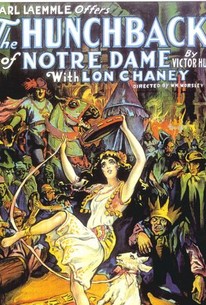 Critics Consensus: A heart-rending take on the classic book, with a legendary performance by Lon Chaney.

Critic Consensus: A heart-rending take on the classic book, with a legendary performance by Lon Chaney.

The Hunchback of Notre Dame Photos

This second film version of the Victor Hugo novel Notre Dame de Paris (the first was a Theda Bara vehicle, The Dancer of Paris) was a super-duper-spectacular as only Hollywood of the 1920s could make them, but it is never so large that it dwarfs the contribution of its star, Lon Chaney. As the hunchbacked bellringer Quasimodo, Chaney adorned himself with a special device that made his cheeks jut out grotesquely; a contact lens that blanked out one of his eyes; and, most painfully, a huge rubber hump covered with coarse animal fur and weighing anywhere from 30 to 50 pounds. While Quasimodo is but one of many interconnecting characters in the original Hugo novel, he dominates the narrative of this expensive Universal production. Set in the walled city of Paris in the 16th century, the story is set in motion when the evil Jehan (Brandon Hurst), brother of saintly Notre Dame archdeacon Dom Claude (Nigel De Brulier), orders the dog-like Quasimodo to attempt to kidnap gypsy girl Esmeralda (Patsy Ruth Miller). Quasimodo is captured and flogged for his crime, whereupon Esmeralda shows him kindness by offering him water. He reciprocates when Esmeralda, framed on a murder charge by the obsessed Jehan (if he can't have her, no one can), is sentenced to be hanged. Quasimodo grabs a rope and swings down from the towers of Notre Dame, rescues Esmeralda from the gallows, and carries her into the church, shouting "Sanctuary! Sanctuary!" Through a series of convoluted plot twists, Clopin (Ernest Torrence), the king of beggars, leads an army of the Parisian poor to storm the gates of the cathedral and reclaim Esmeralda. Quasimodo defends both the girl and his church by tossing heavy objects and pouring molten lead upon the invaders. This climactic scene was filmed at night, requiring the services of literally every arc light in Hollywood. The Notre Dame set (which wasn't quite as large in real life as it seems on screen) remained standing on the Universal back lot for years after this film was completed, doing background service in the 1925 Lon Chaney starrer The Phantom of the Opera. With Hunchback of Notre Dame, Lon Chaney rose from mere leading player to major star, which led him to even greater success at MGM, where his reputation as "the man of a thousand faces" really got a workout. The story would be remade by in 1939 with Charles Laughton, in 1955 with Anthony Quinn, in 1982 with Anthony Hopkins, and again in 1996 as a sanitized Disney animated musical.

John Cossar
as Judge of Court

Roy Laidlaw
as Charmolou
View All

Critic Reviews for The Hunchback of Notre Dame

Although it is an elaborate-studied piece of work, over which much time and many dollars have been spent, it makes no tumultuous call upon our enthusiasm.

Worth seeing mainly for Chaney's remarkable performance; even bowed and constricted by the heavy weights he used to help simulate Quasimodo's crippled gait, his body remains extraordinarily expressive.

The self-torture demanded by Chaney's makeup is impressive, as are the scales of the sets and the crowd scenes, but nothing comes to life under the flat direction of Wallace Worsley.

Every architectural detail, from the gargoyles down, is intact. It is a stupendous scene -- so good, in fact, that a great many incredulous observers will shake their heads wisely and announce that the whole thing is no more than a clever fake.

An awe-inspiring achievement, featuring magnificent sets (built on the Universal backlot), the proverbial cast of thousands (the crowd scenes are mesmerizing), and an opportunity to catch Lon Chaney at his most commanding.

Praise must be given to the massive sets, built on studio lots yet containing a bounty of details and incredible recreations of Parisian locales.

Despite being 95 years old, it remains a classic. It also marks a true beginning of Universal Monster Films that would come to define horror for decades.

It's for [Chaney's] inimitable genius alone that this sprawling saga is now most fondly remembered.

From any facet or dimension, The Hunchback of Notre Dame is a true classic in its own right due to its ambition, scope, scale and payoff. However, the real reason to see this film is the incomparable performance of one Lon Chaney.

Audience Reviews for The Hunchback of Notre Dame

Deformed bell-ringer Quasimodo takes it upon himself to protect the beautiful and kindhearted gypsy girl Esmeralda when she is falsely accused of murder. The silent version with Lon Chaney is understandably overshadowed by the magnificent talkie with Charles Laughton, but this one is fast-paced and spectacular by silent film standards, packing quite a bit of Victor Hugo's novel into about two hours.

Worth seeing for Lon Chaney's performance and the grand 15th century Paris settings.

To be honest I was expecting to like this a lot more than I did. I'm especially disappointed that adaptation decay existed even in the very early pictures, and I wasn't really able to get over how sanitised elements of it were from the novel.

"The Hunchback of Notre Dame" is possibly the earliest film adaptation of the Victor Hugo novel and features some of the most iconic film visuals of the 20th century. Lon Chaney is a legend of the silver screen, most famous for his amazing make-up techniques and his willingness to throw himself into his part (perhaps he was cinema's first "method actor"?). However, while Chaney seems only capable of two facial expressions, he brings a wide array of subtle ticks (constantly flicking his tongue out of his mouth, for instance) and broad physical movements to the role. The film itself suffers from a lack of editing, it takes alot of time for a little to happen. Watching a great silent film can be like watching a painting come to life, like watching the angels dance in the Sistine chapel, but watching a bad one can be like watching the paint dry. This film falls somewhere in the middle, saved mainly by the last act, where the true sadness of Quasimodo's life and character is seen. I'm looking forward to seeing Charles Laughton's performance of the title role.

The Hunchback of Notre Dame Quotes