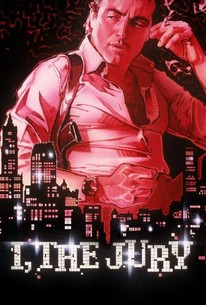 I, the Jury Photos

Larry Cohen wrote the screenplay to this updating of Mickey Spillane's notorious 1947 novel. Cohen was originally engaged to direct the film as well but was pulled from the director's chair after a week's worth of shooting because he had already run up the budget by $100,000; he was replaced by television director Richard T. Heffron. In this 1982 I, the Jury, Mike Hammer (Armand Assante) is a Vietnam veteran who wears hip duds and drives around in a bronze Trans Am in much the same way as Robert Mitchum's Philip Marlowe was refurbished for Michael Winner's re-make of The Big Sleep. After a cheesy rip-off of a James Bond-style credit sequence, the story kicks in. One-armed detective Jack Williams (Frederick Downs) is murdered. Jack was Hammer's best friend, and Hammer decides that he will become a one-man vigilante squad and seek vengeance on the person responsible for his death. He enlists the aid of his vivacious secretary Velda (Laurene Landon) and is also helped and hindered by police-chief Pat Chambers (Paul Sorvino). Hammer latches on to the killer's trail, then the film veers in a radically different direction from the book, introducing government conspiracies and mind-control techniques by the CIA and the Mafia. Also introduced is Hammer's love interest Charlotte Bennett (Barbara Carrera), an administrator of a kinky sex clinic (depicted as a psychiatrist in the original novel). ~ Paul Brenner, Rovi

Richard Dahlia
as Doctor at Clinic

Critic Reviews for I, the Jury

Apart from Assante and the random effective bit player -- notably Frederick Downs, a Veterans Administration official who plays the first murder victim, Jack Williams -- the level of acting tends to be perilously amateurish.

I, the Jury is a violent private eye thriller, with a certain redeeming sense of style.

The souped-up remake is hard as nails, with Armand Assante plausibly macho and ruggedly sexy as the amoral private eye who avenges the murder of his old Vietnam war buddy.

The movie careers by at a fast and cheeky pace. Its clues are strewn across a glossy landscape of city streets and pretty girls in various stages of dress and death by torture, and are delivered in an impenetrably gritty New York accent.

With the exception of Robert Aldrich's Kiss Me Deadly, all Hammer films have been disappointments. This version of I, the Jury is no exception.

Like most other of Spillane's Hammer series put to celluloid it comes out well-short of the novel.

The central fault in this updating is Mike Hammer, whose character was lost in the shuffle while updating from the fifties to the eighties.

Audience Reviews for I, the Jury

There are no featured audience reviews yet. Click the link below to see what others say about I, the Jury!

I, the Jury Quotes