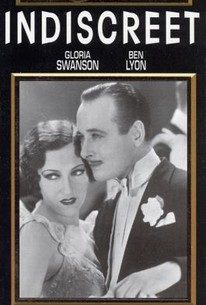 Divesting herself of her own production company, silent-screen queen Gloria Swanson entered into a two-picture deal with producer Joseph M. Schenck, which paid her a straight (and very hefty) salary for both productions. The first film completed under this arrangement was the trivial romantic comedy- musical Indiscreet, scripted and scored by songwriters Buddy G. DeSylva, Ray Henderson, and Lew Brown and directed by the matchless Leo McCarey. Swanson plays Geraldine "Gerry" Trent, a worldly socialite who endeavors to protect her sister Joan (Barbara Kent) from the lecherous machinations of Jim Woodward (Monroe Owsley). But when Joan discovers that Jerry and Woodward were once lovers themselves, she mistakenly believes that Jerry's attempts to break up her romance is motivated by jealousy. In fact, Jerry is completely committed to Joan's brother Tony Blake (Ben Lyon). One of the more successful of Gloria Swanson's talkies, Indiscreet posted a much-needed profit for financially strapped United Artists.

This lightweight morality tale has Ms.Swanson pay the price for sex w/o marriage in that the swine hesitates when asked about marriage and, after being kicked to the curb, then seeks revenge by pursuing her younger - and dumber - sister. It was a popular and successful rom-com in its time, some of the writing bright and quick, but now mainly comes across as stale and starchy, the type of film that chases new audiences from older films. Only Swanson and, surprisingly Arthur Lake, escape condemnation to the ashbin of history. The dinner scene wherein Swanson plays crazy is perhaps the only notable standout.