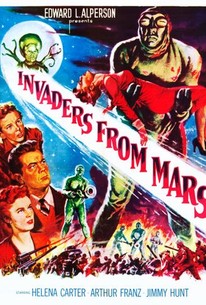 Originating during the science-fiction/Red-Scare boom of the '50s, Invaders From Mars is an entertaining little picture that holds up reasonably well. David MacLean (Jimmy Hunt) is a 12-year-old astronomy buff who is stunned to see a flying saucer landing in the sand pit beyond his backyard. His father, George (Leif Erickson), ventures out to look the next morning and mysteriously disappears. David's mother, Mary (Hillary Brooke), worriedly calls police, but they are quickly swallowed up by the sand in the backyard. Later, George and the two cops return, but their personalities are markedly different having been taken over by the Martians. As David tries to find help, everyone around him comes under the frightening zombie-like spell. He finally encounters two believers in Dr. Blake (Helena Carter) and Dr. Kelston (Arthur Franz). Discovering David's shocking story to be true, the doctors call in the military setting up a confrontation that escalates when David and Dr. Blake are taken captive within the Martian craft. The soldiers race to save the pair from the green menace leading to an explosive finale that involves bullets, grenades, TNT, and a spectacular alien ray gun that can melt stone.

Harry Monty
as Mutant
View All

News & Interviews for Invaders from Mars

The 20 Most Groundbreaking Sci-Fi Movies From 20th Century Fox

View All Invaders from Mars News

Critic Reviews for Invaders from Mars

It isn't great, but it is great fun.

Invaders from Mars really is laughably camp and an often goony 79 minutes, but if that was its totality it would be utterly dismissed like so many of its kin today.

Wm. Cameron Menzies' almost-masterpiece of Cold War paranoia, bracing and impactful despite some conspicuous gaffes in the costuming-and-effects department. The underlying beauty of it all is a tacit understanding that yes, It Can, Too, Happen Here.

One of the silliest and most threadbare 1950s science fiction movies, while at the same time being one of the best.

An enjoyable B-movie, but not quite as good as its reputation suggests it would be.

Audience Reviews for Invaders from Mars

Seen through the eyes of a little boy, seen from his very back window, the insidious Martians come to conquer, even controlling Mom and Dad! Its a fun adventure with some few thrills seen through that perspective, the point of view of a bored kid looking through his back window, suddenly the only one knowing about the plans to conquer the planet. The only one to stand against the plan that might well succeed. Me likey. But it is a kid's movie.

The movie starts out rather well, but after the first act it stagnates into a low budget "War of the Worlds". By the end I was left with the feeling that this film could have been so much more than it was. The film does a pretty good job in pulling the viewer into the shoes of the film's child protagonist as he slowly witnesses people slowly falling to the martians control. Seeing the boy's caring parents turn into heartless puppets controlled by the martians is unnerving, and provides an interesting set-up. However, the moment the military gets involved in the plot, the movie dissolves into a typical 50's "martians vs. the Earth" affair and the boy becomes a secondary character until the very end. It is almost funny how the military keeps allowing the boy to hang around them while they try to defeat the aliens. Way too much stock footage is used that pans out the film's run time and the reveal of the martians is a total letdown. The martians look like grown-men wearing brown onesies (you can actually see the zippers on their backs) and the alien leader is a really fake-looking tentacled head. The spaceship set is cheesy to the point that it almost gives off a trippy surreal vibe. Despite a decent but drawn-out climax, the gets bogged down a whole level because of it's terrible ending. If the movie had stuck with the child's point of view and been consistent with it's psychological themes, then this movie could have been a nice little gem.

The quintessential science-fiction film of the 1950s. Ripe with cold-war innuendo, Invaders from Mars has, in a sense, become a parody of itself. It's as if someone merged John Carpenter's The Thing with an old episode of Leave it to Beaver.

Another great sci-fi movie from the fifties, a young kid must prove that aliens are taking over, sort of like the Blob meets Invasion of the body Snatchers, but with a kid. I really liked it.