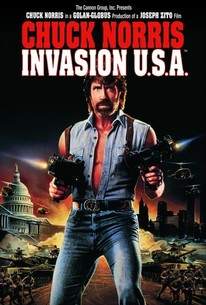 This red-baiting action film stars Chuck Norris as Matt Hunter, a retired CIA agent who lives in the Florida Everglades. A communist invasion of Miami brings Hunter out of retirement to fight the encroaching hordes led by everyone's favorite low-budget bad guy, Richard Lynch. The film is extremely jingoistic, presenting the evil communists staging an invasion on Christmas, demolishing a church, and attempting to blow up a school bus full of children. From the same school of thinking which produced Rambo and Red Dawn, this film at least features some convincing gore by makeup wizard Tom Savini (Friday the 13th), working on his third gig for director Joseph Zito. Zito and Savini returned with Red Scorpion.

Nate Esformes
as Terrorist with Tomas

Tony Bolano
as Terrorist with Tomas

Sheryl Brown
as Girl on Car

Beth Burns
as Girl in Car

Jeff Benninghofen
as Boy in Car

Bruce Evers
as Terrorist as Guardsman

Robin Kinsey
as Waitress at Beach

Bob Hannah
as Father at Church

Laura Whyte
as Mother at Church

Susan Sullivan
as Daughter at Church

Anthony Correa
as George
View All

[A] terrific premise but no script.

"Invasion USA" might actually be fun in a campy way if it weren't so dourly exploitative.

A brainless plot would be almost forgiveable were it not for the perverse depiction of innocents butchered in Invasion U.S.A.

Even though Mr. Norris collaborated on the screenplay and helped to choose the director (Joseph Zito), the movie treats him as if it wanted to prove that he has absolutely no future on the screen.

"Invasion U.S.A." is a brain-damaged, idiotic thriller, not even bad enough to be laughable.

There are some sufficiently large explosions and acceptable preposterous setups, but ... I'm not sure Invasion U.S.A. is worth tracking down.

A numbingly stupid actioner, INVASION U.S.A. has one of the most laughable villains ever committed to film.

Director Joseph Zito has in fact made both good and bad guys equally one- dimensional and unlikable.

Even for its Reaganite times, this is complete trash.

There may be no greater example of the simpler, more triumphant, and naive cinematic times the 1980s truly were than Invasion USA, in which one single man... could literally save the entire country.

If you're looking for laughs over seeing a good film, this one will please."

Very entertaining and fun low-budget action B movie that is meant to be pure mindless popcorn amusement from start to finish. Before watching this one, you should realize that this film was not meant to be taken seriously whatsoever. With a film starring Chuck Norris, how could it be? As far as entertainment value is concerned, Joseph Zito's Invasion U.S.A. is a must see for B movie action fan. The action is over the top, and the acting is mediocre, but there's enough thrills in this one to keep you entertained and engaged with what's going on on-screen. I really enjoyed the film, but I agree it won't get any honors for original ideas in terms of great story, which is absent and great acting, which never does stand out. Norris does standout, due in part to his intentionally funny one liners and questionable acting. He's fun to watch on-screen nonetheless. If low-budget action flicks are your thing, then give this one a shot. Invasion U.S.A. is flawed mindless entertainment at its finest, just don't expect anything great and you'll probably enjoy it. Director Joseph Zito is an effective director for low-budget pictures, and he's perfect for this material presented here. This is a film that is meant to be enjoyed with friends over a couple beers on a Friday night when you have nothing else better to do. Invasion U.S.A. is a film that tends to rely more on the action than anything else, and it does that very well. Minimal plot, a big body count, Chuck Norris kicking ass, if that's your thing, then definitely give this one a shot. The only reason that this film doesn't get a full score is because Chuck Norris reloads his weapons, I thought the guy never ran out of bullets!

Good chuck fare. If you can take away Chucks bad acting and all the Americana present then its not a bad action flick.

Hard-R, over-the-top, hilariously absurd action movie with a political paranoia bent. This film gives us a this-could-happen doomsday scenario from the era of the Cold War. Maniacal Communist terrorists, led by poker-paced psychopath Rostov (Richard Lynch) land on American soil, just annihilating everybody in their path. But there is one man, and one man alone, who can save the day..."retired" secret agent Matt Hunter (Chuck Norris). Chuck gives one of his more stone-faced portrayals, but the character himself is one of his more sullen and ruthless. I'll say that much - these two adversaries deserve each other, although the final confrontation is a long time coming. I have to give credit where credit is due: the film-makers, led by director Joseph Zito, let us know up front we're in for a heck of a ride. They gleefully toss credibility out the window, and, just for good measure, dispense with any level of political correctness. The movie is rough, tough, and rousing (although it takes about half the film for things to really kick into gear), aided in no small part by a stirring music score by the talented Jay Chattaway. Sequences ranging from funny to just plain insane involve a) the messy dispatch of a sleazy drug dealer (Billy Drago) and a hooker, b) a loud and noisy assault on a suburban neighborhood, and c) a major shootout in a shopping mall. This film truly throws in everything (including the kitchen sink) for the sake of an entertaining show. Co-starring Melissa Prophet (whose gutsy, obnoxious, pushy reporter is more of an annoyance than anything else), Alexander Zale, Alex Colon, Eddie Jones, and Dehl Berti. Co-written by Chuck himself and James Bruner, based on a story by Bruner and Chuck's brother (and frequent collaborator) Aaron. My final parting words are just this: of the assembly line of Cannon Films action pictures and thrillers to come out of the 1980's, this has to rank up there as one of the most potent guilty pleasures that they made. Period.

Three cheers for Norris by protecting USA and make wage war upon the army of terrorist mercenaries.