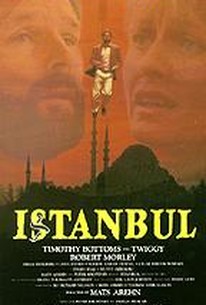 Istanbul, also released as Istanbul, Keep Your Eyes Open, is an old-fashioned, shallow, unbelievable thriller. Frank Collins (Timothy Bottoms) is an American reporter living in Sweden. Collins receives a video from his stepson's real father and goes to Istanbul, leaving his stepson at home, but taking his daughter. While in Istanbul, Collins meets Maud. Collins daughter is kidnapped and he finds out about a weapons-smuggling ring. The convoluted plot then involves false identities, murders and evidence of an impending assassination, with a number of car chases. The entire movie is jumbled, confusing and finally concludes in a downbeat, unconvincing muddle with most of the lost strings still untied. Views should beware of this low-rent rip-off of Roman Polanski's Frantic or Alfred Hitchcock's The Man Who Knew Too Much. ~ Linda Rasmussen, Rovi

There are no critic reviews yet for Istanbul. Keep checking Rotten Tomatoes for updates!

There are no featured reviews for Istanbul at this time.