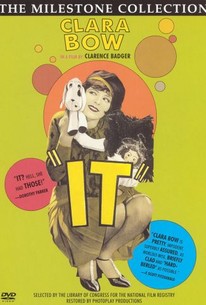 Contrary to popular belief, Clara Bow was already Paramount's biggest box-office draw when she starred in this delightful rags-to-riches comedy. But It, from the fertile mind of bizarre best-selling author Elinor Glyn, remains perhaps the quintessential Bow picture. Not that the story of a poor shopgirl falling for her rich employer was anything new (by 1927, Bow could play that role in her sleep), but It came complete with one of the best publicity campaigns in Hollywood history. Glyn herself publicly pointed to Bow as the personification of It, "that quality possessed by some which draws all others with its magnetic force." Paramount made sure that Glyn's lofty description of the word sunk in and even convinced the author to explain It in the film to leading man Antonio Moreno (who, according to Glyn, simply oozed It as well). The lightweight comedy behind all this hoopla centered on little Betty Lou Spence, a vivacious salesgirl invited to dinner at the Ritz by foppish wastrel and self-described "old fruit" "Monty" Montgomery (William Austin in one of those roles later personified by Edward Everett Horton). Betty is not paying attention to her dinner companion, however, but is ogling department store heir Cyrus Waltham (Moreno). He notices her too, and takes the salesgirl on a whirlwind tour of Coney Island. But when Betty is mistakenly assumed to be the unmarried mother of an infant (actually her roommate Molly's), stern Cyrus no longer sees her as proper marriage material. Betty, of course, gets her man in the end and Waltham's snooty girlfriend ("other woman" specialist Jacqueline Gadsden) ends up in the drink. Delivering all the vivacious punch expected of a Bow comedy, It takes time out for a couple of rather poignant scenes. With the hindsight that Brooklyn's own Bow was never fully accepted by Hollywood society despite her stardom, it is touching to watch Betty being ostracized at the snobbish Ritz; and Bow is never more affecting than when she realizes that Moreno is offering diamonds and pearls instead of marriage. Priscilla Bonner, as Bow's drab, single-mother roommate, adds a touch of realism to her brief role, enviously observing Betty's frivolity. If It only added to Bow's brilliant success, the film did little for the intelligent Bonner. To the end of her life, Bonner maintained that accepting featured billing in It lost her any chance of true stardom. A very young Gary Cooper, has a bit as a reporter and director Josef Von Sternberg reputedly took over for Clarence Badger during a brief illness. Despite its rather trite Cinderella plot, It magnificently demonstrates why Bow's guileless flapper came to define an entire decade. It is heartbreaking to realize that her decline had already set in, and Bow's very public troubles and eventual career destruction were lurking right around the corner!

Elinor Glyn
as Herself

Critic Reviews for It

Unfortunately, the salesgirl who is supposed to have "it" must strike educated beholders as a rather vapid hoyden.

It is smart, funny and real. It makes a full-size star of Clara Bow and it hits William Austin out of the minor class into the upper crust of screen comedians.

The pacing is swift, the expressions priceless, and the confrontational, situational comedy uproarious.

It isn't a complete waste of time, but what could have been sometimes outweighs what made it to the screen.

It's a throwback, for sure, but this throw has a bit of a curve.

It's all very standard romantic-fantasy stuff, but it moves with the rhythm of a hot jazz tune, and Bow lights up every moment she's onscreen.

This 1927 feature is a routine story of a salesgirl smitten with the department-store heir, yet Bow gives it a champagne fizz.

The best-known movie of Clara Bow, the silent screen's most popular, appealing, and underrated actress.

It's immediately apparent why [Clara Bow] was so beloved.

This film alone serves as ample explanation for why Clara Bow will forever remain a Hollywood legend.

Bow does have "it." Her presence is magnetic, embodying the franticness of a frantic era. Watching It you're sorry again that the Jazz Age had to come to an end.

Audience Reviews for It

Clara Bow is an absolute delight in this film, and one can really see why it catapulted her into international stardom. Her face is so expressive and animated, displaying a wide range even in what is a pretty simple story, and it's clear that she has that certain indefinable something, that magnetism, that 'It" that the film is based on. I was especially tickled by her performance early on. She plays a saleswoman who falls for her employer (Antonio Moreno), and then uses his friend (William Austin) to get closer to him. She's simply charming in scenes ranging from making faces at a baby, to laying suggestively on top of her boss's desk on her tummy. The story is fairly standard, but it's well paced in its 72 minutes. Naturally, there is another woman involved, and there are also complications from the differing social classes that Bow and her boss come from, which is made worse when she has to stand up for her roommate in a way I won't describe. Watch it for Bow, who is fantastic.

Elinor Glyn, writer of risque romantic fiction in the early twentieth century, adapted her own story, appears as herself at The Ritz, and produced this picture. "It" is not just sex appeal. It is hard to define. One title card in this flick says It is, "self-confidence and indifference as to whether you are pleasing or not." The soundtrack is bouncy jazz age fun. There are quite a few title cards providing dialog, but they are brief and full of amusing figures of speech from the '20s. Clara Bow is Betty Lou, a girl of the era who is bursting with energy. She becomes infatuated with her department store boss Cyrus Waltham, played by Antonio Moreno. His bug-eyed nervous friend Monty (Austin) has been reading about "It" and decides Betty has It. Betty pretends to date Monty to get closer to Mr. Waltham, but it takes him awhile to notice her as he is attached to snooty blonde Adela (Gadsden). Eventually Betty and Cyrus have a date at the amusement park, which was a treat to observe. Complications arise when Betty tries to help her single mother roommate by preventing social workers from taking the baby. Monty is fooled and blabs to Cyrus that Betty is an unwed mother. On a yachting trip she toys with Cyrus for treating her like a bought woman. She pretends to be French. The picture quality looks good and there are lots of laughs. Later this sort of storyline would be recycled ad infinitum, however it is nice to see this early example truly from the female perspective with the fascinating Clara Bow as the star.

This is an interesting romantic drama, which gives you a sense about relationships in the time period, but it is a predictable love story. There are some funny moments, but the movie could have been better.