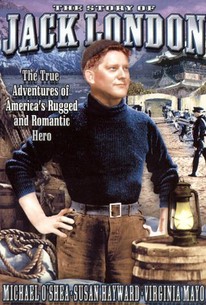 This ambitious filmed biography of writer-adventurer Jack London is somewhat compromised by its too-tight budget. Michael O'Shea is well cast as London, whose rugged adventures range from the high seas to the Klondike. London's insatiable wanderlust causes friction in his marriage to the lovely Charmian (Susan Hayward), but she stands nobly by his side in good times and bad (it should be noted that the script is based on Mrs. London's memoirs). In the interests of topicality, the film contrives to have London endeavor to warn America of Japanese military expansion some four decades before Pearl Harbor. It is this story element that makes Jack London a bit difficult to watch today, despite the strong performances of O'Shea, Hayward and a superb supporting cast.

Edmund Cobb
as Father of child

A typical Hollywood biopic, typically overblown, but undercut by the star, Michael O'Shea, who seems a one note actor whose feet are too small for the part given him (although the attempt is plain to see), which might be why he is not remembered. The focus of the film at the final portion on London's Japanese adventure strain credulity.

London surely had an exciting life some of which is shown here but leading man O'Shea has the screen charisma of lint and without a compelling center the film just plods along. Susan Hayward, exuding more presence and star quality in her small part than O"Shea ever would is wasted in a nothing part.