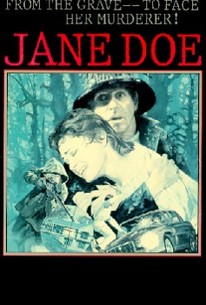 Jane Doe, played by Karen Valentine, is an amnesiac with no clue as to her true identity. She does know that she's recovering from a brutal attempted murder. She also knows that a psychopath--a serial killer known as the Roadside Strangler--is tracking her every move. But why? William Devane plays the detective on the case, David Huffman appears as Doe's husband, and Stephen E. Miller is sufficiently menacing as the Strangler. But don't be lulled into complacency: there's a surprise ending. Originally telecast March 12, 1983, Jane Doe was written by Cynthia Mandelberg and Walter Halsey Davis.

Stephen E. Miller
as The Strangler

There are no critic reviews yet for Jane Doe. Keep checking Rotten Tomatoes for updates!

There are no featured reviews for Jane Doe at this time.