Jason and the Argonauts1963 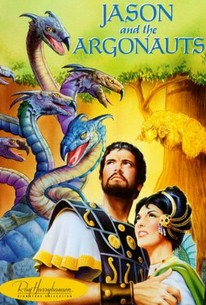 Critics Consensus: Don Chaffey's Jason and the Argonauts is an outlandish, transportive piece of nostalgia whose real star is the masterful stop-motion animation work of Ray Harryhausen.

Critics Consensus: Don Chaffey's Jason and the Argonauts is an outlandish, transportive piece of nostalgia whose real star is the masterful stop-motion animation work of Ray Harryhausen.

Critic Consensus: Don Chaffey's Jason and the Argonauts is an outlandish, transportive piece of nostalgia whose real star is the masterful stop-motion animation work of Ray Harryhausen.

Jason and the Argonauts Photos

The legendary Greek hero leads a team of intrepid adventurers in a perilous quest for the legendary Golden Fleece. Jason has been prophesied to take the throne of Thessaly. When he saves Pelias from drowning, but does not recognize him as the man who had earlier killed his father, Pelias tells Jason to travel to Colchis to find the Golden Fleece. Jason follows his advice and assembles a sailing crew of the finest men in Greece, including Hercules. They are under the protection of Hera, queen of the gods. Their voyage is replete with battles against harpies, a giant bronze Talos, a hydra, and an animated skeleton army.

News & Interviews for Jason and the Argonauts

View All Jason and the Argonauts News

Critic Reviews for Jason and the Argonauts

Special-effects buffs generally cite this 1963 effort by Ray Harryhausen as the master's masterpiece, and his work does a great deal to enliven the tired plot and vacuous stars.

For sheer old-fashioned, childhood rekindling adventure you really can't go past it.

The $3 million film has a workable scenario and has been directed resourcefully and spiritedly by Don Chaffey, under whose leadership a colorful cast performs with zeal.

Great fun, as these things go, with a Bernard Herrmann score to boot.

This absurd, unwieldy adventure -- if that's the word -- is no worse, but certainly no better, than most of its kind.

The straight story of Jason's exploits, told with magic and imagination and a minimum of studio trickery, might have been delightful. This version is more bull than Bulfinch.

Though a worthy addition to the series of fantasy films adorned with Harryhausen's animation, the characters and creatures don't make the list of his most iconic concoctions.

But what puts it over the top is a strange sense of melancholy pervading the machismo heroics.

Jason and the Argonauts exists now mostly as a fine piece of nostalgia. Viewed clearly, it's a poorly-made collection of fantastical tropes. Through rose-colored glasses, though, it's a vibrant, colorful masterpiece of cheese.

"Jason and the Argonauts" features some of Harryhausen's most memorable stop-motion creations, including the giant bronze statue Talos and a creepy army of swordfighting skeletons.

Made while Hollywood was plundering Roman history at vast expense, this British picture went further back in time and created a niche of its own.

Audience Reviews for Jason and the Argonauts

The classic mythological Greek tale of Jason, the good ship 'Argo' and its brave Argonauts, sailors of the Argo. This is most probably Harryhausen's greatest accomplishment in film, probably his most well known film and most probably his best film alongside the other Greek classic 'Clash of the Titans'. The plot? surely we all know it by now, 'Jason' and his warrior sailors venture off to find the legendary Golden Fleece of 'Colchis' battling various obstacles on the way. Like most films the plot has been altered somewhat obviously for dramatic effect and simply because Greek mythology is quite complex offering many problems for film makers of the time. In no way does this deter from the films excellence at any point, you can easily enjoy the adventure knowing nothing of Greek mythology. Without trying to cast a shadow over the films director or the decent cast throughout the film, but this is pretty much the Harryhausen arts n crafts show. All the cast put in sterling performances, as you would expect of the era, with director Chaffey clearly doing something right. I must admit to always feeling a tad sorry for the cast and crews in films like this as they do tend to be known as Harryhausen flicks and nothing else. For me the Nigel Green as some bloke called 'Hercules' stood head and shoulders above the rest. Now not only was his performance quite amusing and gloriously tongue n cheek in that stout old fashioned way, but his thick curly hairstyle was quite impressive too hehe. His whole look was burly, gruff, jolly and fun, yet not bulging with muscles. I also liked how the Argonauts in general weren't all big muscle bound meatheads, and the hero Jason (Todd Armstrong) was quite a regular looking guy, not some pretty boy. It gives the film a little sense of reality amongst all the fantasy. You know in this day and age the entire crew would be more pumped than the Michelin Man. Of course the real interest kicks in when we see the mighty 'Talos' come to life and surge across the beach attempting to stomp the Argonauts. Is this the best sequence in the film? hmmmm it comes damn close despite nothing much happening. The entire sequence just looks so damn good and intimidating you can't fail to love it, how fudging cool is 'Talos'!!. After this its a virtual onslaught on awesomeness as Harryhausen moves into fifth gear. The 'Harpies' were probably the weakest of the creature creations in the film, they don't look quite as sharp as the rest really. But rest assured the 'Hydra's' brief moment in the spotlight got things right back on track. A shame that no sooner does this classic creature appear 'Jason' kills it off pretty quickly...and easily really. But even then when you think you'd seen the best the film has to offer in terms of shadow fighting monsters we get the greatest sequence by Harryhausen ever!. Yeah you all know what I'm talking about, the famous battle between the skeleton warriors and the Argonauts must be one of the most influentially inspiring sequences of all time. It wowed me as a youngster and it still does today, the film has become known for that sequence alone really but its understandable. I loved how the 'Hydra' sequence leads into this epic undead sequence via the 'Hydra's' teeth being sown. I love how one scene gives meaning to the other without resorting to crowbarring in random monsters just for the sake of it. Again a small sequence involving live action is used here like 'One Million Years B.C.' only this time it looks much much better. I'm glad they didn't use this option too much as it is a bit dubious looking against the obvious models and out of scale water but they just about get away with it. Would have been interesting to see a full stop motion 'Triton' though, much like the 'Kraken', I guess cost came into it. Creatures aside the film in general is fine, a steady pace, not overly exciting but not dull either. The Mount Olympus sequences are cheesy as hell, the Argonauts battle armour costumes are superb and appropriately heroic looking (love those outfits) and location work is truly stunning in the film. Rough mountainous terrain and pure blue seas under a clear blue sky, it looked hot. After all these thrills the film does end rather abruptly like many of these oldies tend to. Not too much of a problem though, after seeing some of the greatest stop motion sequences ever committed to film.

Before he tackled Greek mythology in Clash of the Titans, Ray Harryhausen put his immense talents to work in Jason and the Argonauts. The movie concerns the Greek myth about Jason, and his quest for the Golden Fleece. The story itself is a pretty fun and entertaining adventure tale, but it is made even more awesome thanks to Harryhausen's stop-motion creature effects. They're the true highlight of the film, and they don't disappoint, especially the climactic 4 plus minute battle between 7 skeleton warriors and Jason (plus two of the Argonauts). Aside from the effects, the other major show stopper is the score by Bernard Herrmann. It's not really like some of his great work he did for Scorsese of Hitchcock, but it's still some really rousing music that really fits a story filled with adventure, danger, and fantasy. This is really just a B-movie, but it's spectacular stuff that is very entertaining and extremely watchable. The acting is a little blah, but decent enough, given the circumstances. The film may be almost a haalf century old, but it has a very timeless and charming quality to it, and the effects are still really impressive, even to this day. In fact, this film is just impressive because it shows how far we've come with special effects, and a movie like this makes you appreciate the hard work and passion that it took in the pre-CGI days. Give this one a watch- it's really good, dopey fun.

This movie is so cool, the special effects are awesome, and the story is a classic epic tale. This is a really good movie.

I absolutely love Jason and the Argonauts. This one's got it all--well told Greek mythology, Ray Harryhausen's fantastic special effects, great monsters, great fights and vintage foxiness. Admittedly, the stop motion effects are probably laughable by today's standards but the storytelling more than makes up for it.

Jason and the Argonauts Quotes