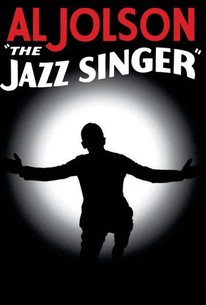 Critics Consensus: The Jazz Singer's synchronized dialogue marks a milestone for cinema, but apart from Al Jolson's performance, this is a rather ordinary story made noteworthy by its technical wonders.

Critics Consensus: The Jazz Singer's synchronized dialogue marks a milestone for cinema, but apart from Al Jolson's performance, this is a rather ordinary story made noteworthy by its technical wonders.

Critic Consensus: The Jazz Singer's synchronized dialogue marks a milestone for cinema, but apart from Al Jolson's performance, this is a rather ordinary story made noteworthy by its technical wonders.

On the verge of receivership in 1926, Warner Bros. studio decides to risk its future by investing in the Vitaphone sound system. Warners' first Vitaphone release, Don Juan, was a silent film accompanied by music and sound effects. The studio took the Vitaphone process one step farther in its 1927 adaptation of the Samson Raphaelson Broadway hit The Jazz Singer, incorporating vocal musical numbers in what was essentially a non-talking film. Al Jolson stars as Jakie Rabinowitz, the son of Jewish cantor Warner Oland. Turning his back on family tradition, Jakie transforms himself into cabaret-entertainer Jack Robin. When Jack comes home to visit his parents, he is warmly greeted by his mother (Eugenie Besserer), but is cold-shouldered by his father, who feels that Jack is a traitor to his heritage by singing jazz music. Several subsequent opportunities for a reconciliation are muffed by the stubborn Jack and his equally stubborn father. On the eve of his biggest show-business triumph, Jack receives word that his father is dying. Out of respect, Jack foregoes his opening night to attend Atonement services at the temple and sing the Kol Nidre in his father's place. Through a superimposed image, we are assured that the spirit of Jack's father has at long last forgiven his son. Only twenty minutes or so of Jazz Singer is in any way a "talkie;" all of the Vitaphone sequences are built around Jolson's musical numbers. What thrilled the opening night crowds attending Jazz Singer were not so much the songs themselves but Jolson's adlibbed comments, notably in the scene where he sings "Blue Skies" to his mother. Previous short-subject experiments with sound had failed because the on-screen talent had come off stilted and unnatural; but when Jolson began chattering away in a naturalistic, conversational fashion, the delighted audiences suddenly realized that talking pictures did indeed have the capacity to entertain. Despite its many shortcomings (the storyline goes beyond mawkish, while Jolson's acting in the silent scenes is downright amateurish), The Jazz Singer was a box-office success the like of which no one had previously witnessed. The film did turn-away business for months, propelling Warner Bros. from a shoestring operation into Hollywood's leading film factory. Proof that The Jazz Singer is best viewed within its historical context is provided by the 1953 and 1980 remakes, both interminable wallows in sentimental goo. Worse still, neither one of those films had Al Jolson--who, in spite of his inadequacies as an actor, was inarguably the greatest musical entertainer of his era. ~ Hal Erickson, Rovi

May McAvoy
as Mary Dale

Bobby Gordon
as Jakie at Thirteen

Cantor Josef Rosenblatt
as Himself

Roscoe Karns
as The Agent

Critic Reviews for The Jazz Singer

The first sound film! One wishes that the 100,000th sound, movie ever made 'we are at least somewhere near that figure!) had such an. effective track.

Sitting through The Jazz Singer is very much like attending a very ordinary musical comedy with one star who happens to be good. The star cannot always be on the scene and the evening develops into a series of long waits.

It is probably one of the greatest events in the world of entertainment in years.

The Jazz Singer would be a good picture without Vitaphone, but it wouldn't be half as good as it is now.

Undoubtedly the best thing Vitaphone has ever put on the screen.

Coupled with the acting of Jolson. and the wonders of the Vitaphone, in which the synchronization is so good as to suggest further interesting developments in the way of talk pictures, [the film] provides about all the enjoyment that could be hoped for.

Eugenie Besserer gives one of her inimitable impersonations, and May McAvoy is charming as always as the girl who takes an interest in the jazz singer and helps him along in his career.

The Jazz Singer is unlike any picture seen here in the past... instead of contenting itself to be a mere motion picture, it introduces the Vitaphone in the role to which it surely must be destined that of giving life to the silent drama.

At present the Globe is the only theater in Kansas City equipped to present Vitaphone numbers. Until you have seen and heard this offering you are in no position to appreciate these words of ours.

While Al Jolson's performance, his first as a screen star, is generally good, the high spots of the picture came with that familiar swaying, infectious Al Jolson voice; the inimitable Jolsonesque on the screen abetted by its master's voice.

Entertainment all the way through, the sort of box-office combination of tears and smiles that always will be sure-fire, The Jazz Singer is nothing short of a magnificent triumph for Warner Brothers, for the Vitaphone, [and] for Al Jolson.

The story is good and the caste has been well selected. Al Jolson has a marvellous voice, and everyone will enjoy his performance. It is not possible, however, to form a definite judgment of talking films from The Jazz Singer.

Audience Reviews for The Jazz Singer

Notable as the first feature film with audible dialogue and touching as it shows a man torn apart by a difficult decision, it becomes a disgusting melodrama in its last fifteen minutes, when its two possible endings are thrown in together and the character makes a most unacceptable choice.

Hoary old chestnut that should be seen for its historical significance, aside from that its the ripest kind of melodrama. Overwrought acting, clutched bosoms, fevered declamations, the works are on display here. Do keep an eye out for a young Myrna Loy, just starting out, as a chorus girl.

An amazing film for its time! I feel awestruck that THIS was the first ever feature length film to include synchronised sound. The narrative and themes are universal and still relevant today, 80 years on. I feel that this would have been even better if they were able to implement sound for the whole film. A beautiful film with beautiful performances. Some people wouldn't be able to look past the fact that it's mostly silent and in black and white, but I'm so glad I was able to do that and experience this film. They didn't just make a random, awful and totally pointless film to add the sound to, they made something worthwhile something where the sound was secondary to the narrative and that's what makes this even more momentous and inspiring. A fantastic chunk of history.