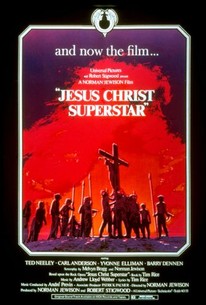 Critics Consensus: Jesus Christ Superstar has too much spunk to fall into sacrilege, but miscasting and tonal monotony halts this musical's groove.

Critic Consensus: Jesus Christ Superstar has too much spunk to fall into sacrilege, but miscasting and tonal monotony halts this musical's groove.

If it weren't for Lost Horizon, this would have gone down in history as the Worst Musical of 1973.

The music quickly becomes monotonous, and the operatic dialogue is silly right from the start.

Despite the 'impressive' desert locations and an array of tanks (to represent the ills of modern militarism), it's still staged like a student revue.

Jewison, a director of large talent, has taken a piece of commercial shlock and turned it into a Biblical movie with dignity.

The supreme failure is the director's own for trying to fill in the vacuity of the material with desperate stratagems of montage and camera trickery, and by feverishly latching on to bits of contemporary relevance that no other cat would have dragged in.

The Webber-Rice score and the complex interpretations of Christ and Judas win out over any shortcomings.

Surely a candidate for the worst stage-to-screen musical adaptation ever.

Yvonne Elliman is electrifying as Mary Magdalene, and Carl Anderson couldn't have been better as Judas; but Ted Neeley as Jesus is more whiny than heroic.

Flawed, but still worthwhile film of the show.

Overall: Some good songs, some interesting choreography, and some utterly forgotten actors.

Like a baptism by fire, Jesus Christ Superstar rarely leaves the viewer in lukewarm waters

A super tacky rock opera that looks awfully outdated and has only a few good songs amid many horrible ones (of course, Andrew Lloyd Webber and Tim Rice), but even worse is how it soon becomes a tedious, inconsequential series of Biblical events after a promising beginning.

This film is about the week before the crucifixion of Jesus Christ by the Romans, and the relationship between Jesus and Judas. Also, if the title doesn't tip you off to the epic power of this film, it is also a musical. A rock opera at that, written and scored by Andrew Lloyd Webber and Tim Rice. There isn't a great need for historical accuracy, or Biblical accuracy at that, and many points in the film have come up for dispute in the Christian community. The film actually took pains to sanitize itself in comparison to the original musical so not to offend them, though most of the time there is little difference between both. Though it may not be useful as an educational tool for the dogma of the Christian religion, it does teach about the relationship between the messiah and one of his apostles, and the way Jesus struggled through the end of his life, ending up very human and yet above it all with his sacrifice for the sins of everyone. He is damned, he does go before Pontius Pilate, and he does end his story with his crucifixion. The musical itself is a blatant anachronism of the seventies and the times of Jesus, fusing the savior's concepts of salvation with the free love and ambivalence of the sixties. The music in the first twenty minutes is the best of the entire musical and features the amazing pipes of Ted Neeley, Carl Anderson, and Yvonne Elliman. The rest of the music (which is the only way the plot moves since there isn't any dialogue) is fairly rock opera-esque, but it's not until the final song that the music starts becoming huge and rock once more. The rest is slow and bleak as it tells the story of Jesus and how he must take the punishment of the Romans and his sacrifice. His and Judas' relationship in the film is really quite interesting and Carl Anderson's performance as Judas is both complex and understated. Ted Neeley is a bit of a shifty eyed pessimistic throughout, and I do believe his performance does not deserve the accolades it brought, or the forty year career he's had playing the character on Broadway. The film did do something different with the traditional musical when it came to sets, characters, in-jokes, and costumes, and that anachronism and tie to contemporary music made the story more accessible for an entirely new generation. Though the film drags in places it is definitely enjoyable and interesting when it came to the original story of frenemies.

A surreal portrait of Jesus with a mix of 70's and music of Andrew Lloyd Webber. Jesus Christ Superstar it's also a tense, unique and sometimes boring, but the soundtrack and the oddity made this controversial cult classic charming musical a likable movie.

This is not the best movie musical ever made, not even close. But is it highly enjoyable? Short answer: Yes. Long answer: This is one of the most surreal films made. Not only is it based on the musical by Andrew Lloyd Webber, but the film gives us thousand anachronisms to stammer at, giving it a very off-beat feel that you can't take your eyes off of. At the end of the day, you have to watch it at least once. *NOTE: The song "Superstar" is AWESOME. Just saying.