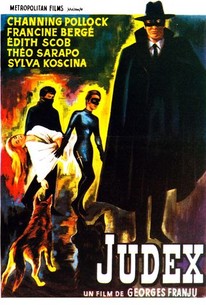 This silent era styled crime drama finds Judex (Channing Pollock) as a former crook set out to right the wrongs of his past. He locates a crooked banker who has swindled people and sent innocent victims to prison. The felonious financier is spared being murdered when his daughter promises to repay everything he has stolen. The film was directed by Georges Franju, one of the founding fathers of the French Film Museum in Paris.

André Méliès
as Doctor
View All

New on DVD & Blu-Ray: The LEGO Movie and The Grand Budapest Hotel

Judex's pacing is syrupy and its tone hazy, like a halting, half-remembered dream of a movie that may have never existed.

In shaving off 210 minutes or so, Franju eliminates all the backstory along with any concern for motivation or logic.

Franju's lack of serious coaching in the acting department shows how little he cared for things like motivation and subtlety. Instead he gets his kicks fashioning surreal set pieces that transcend the melodrama that the plot seems designed to support.

a lot of fun, especially for discerning cinephiles who know their film history

As a hero, Judex may cut a somewhat dull figure once his true face has been revealed, but Franju has set him within a haunting shadow-world where vengeance is too strange to be sweet.

has a lot of fun with feuillade's silent serial hero judex who is like the french batman. wears disguises, lives in an awesome secret lair, uses many gadgets. the story is pretty ludicrous but it's faithful to the spirit of the serials in that everyone takes it very seriously. campy as hell