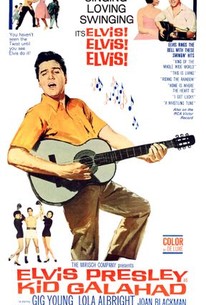 This musical boxing drama finds Walter (Elvis Presley) as a recently discharged soldier looking forwork in New York's Catskill Mountains. He happens across Grogan's Gym, a boxing emporium that helps perfect the "gentle art." Proprioter Willie Grogan (Gig Young) and trainer Lew (Charles Bronson) run the camp for aspiring pugilists. Walter saves Grogan's long suffering girlfriend Rose (Joan Blackman) from an assault by a gangster when he knocks out the goon. He earns the nickname "Kid Galahad" and a chance to show off his talents in the boxing ring. While Walter trains for the big fight, Lew is approached by unsavory gamblers, who want Lew to be lax in repairing any cuts Walter sustains in the ring for a slice of the economic pie. Lew refuses and has his hands broken by the gambling goons. Although Walter knows the fix is on, he battles his way to victory against overwhelming odds and an intimidating opponent. Walter exacts revenge on the men who broke Lew's hands, which may be the first and only time in cinematic history that Charles Bronson needs any outside help. Presley delivers seven songs, the most memorable being "I Got Lucky." United Artists got lucky with the release of Kid Galahad, which drew legions of loyal Presley fans at the box office.

Presley could effortlessly carry this picture himself, but that's actually not required thanks to the efforts of an excellent supporting cast.

Elvis wanted to spread his wings, and he clearly had the chops. Unfortunately, the films just wouldn't let him.

Kid Galahad is a real mixed bag, with some half-baked ideas and some unwanted detours.

Formulaic and completely predictable. Would have been nice to see Elvis get a substantial role in a substantial film once in a while. What a waste.

As long as you realize that Elvis movies are just a vehicle to put his singing butt on TV, you can enjoy the movie no matter how corny the story is.

One of his better movies.

the original is far superior in all aspects but for an elvis movie this one isn't bad.