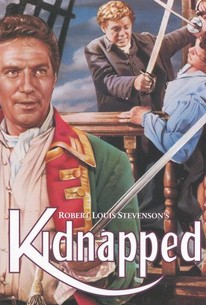 Disney produced this historical adventure of old Scotland, based on the classic novel by Robert Louis Stevenson. James MacArthur stars as David Balfour, a wealthy lad cheated out of his inheritance and sold into servitude by his duplicitous and greedy uncle, Ebenezer (John Laurie). Aboard the ship where he's been made cabin boy, David meets Alan Breck Stewart (Peter Finch), a Jacobite loyalist who thinks the vessel's skipper (Bernard Lee) is transporting him back to Scotland. When David learns otherwise, he and Alan become a team, escaping the ship and taking off across the Highlands. Accused falsely of murder, the pair must clear their names, evade redcoat troops, and restore David's fortunes. Although director Robert Stevenson was no relation to the famed author, the studio claimed otherwise at the time of the film's release, for publicity purposes.

Duncan Macrae
as The Highlander

Alex Mackenzie
as The Ferryman

Edie Martin
as Woman on the bridge

Richard Evans
as Ransome, the cabin boy
View All

It's a robust and sometimes highly diverting comedy-drama, weakened by an excess of flamboyant overacting on the part of John Laurie.

Fun movie, but it doesn't live up to the expectations held from the Swiss Family Robinson. It spends too much time with the exposition and dialogue and never gets around to enough of the adventure. It certainly has some great moments and is by no means a bad adaption, but it fails to be anything more than a screen translation.

If you have trouble sleeping at night, don't waste your money on expensive sleep-inducing supplements. Just pop in this movie. I've been trying to finish it for years.