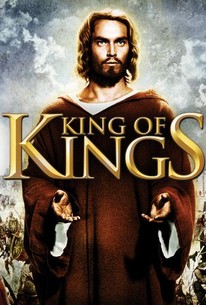 Critics Consensus: With enough narrative depth to anchor the expected spectacle, King of Kings is a true blessing for fans of Biblical epics.

Critics Consensus: With enough narrative depth to anchor the expected spectacle, King of Kings is a true blessing for fans of Biblical epics.

Critic Consensus: With enough narrative depth to anchor the expected spectacle, King of Kings is a true blessing for fans of Biblical epics.

The powerful and critically-acclaimed story of Jesus told in a strikingly beautiful visual style. Stars Oscar-nominees and Emmy-winner Rip Torn (TV's "The Larry Sanders Show") as Judas and Robert Ryan ("Bad Day at Black Rock," "Crossfire," "The Wild Bunch") as John the Baptist with Jeffrey Hunter ("A Kiss Before Dying") as Christ. Directed by Oscar-nominee Nicholas Ray ("Rebel Without a Cause," "In a Lonely Place"). Narrated by Orson Welles ("Citizen Kane"). "...grandly filmed...deeply moving" - Leonard Maltin.

Robert Ryan
as John the Baptist

Ron Randell
as Lucius, the Centurion

Critic Reviews for King of Kings

Jeffrey Hunter is less Saviour of the Christian faith and more anti-hero with many very human doubts and concerns.

Director Nicholas Ray has brooded long and wisely upon the meaning of his meanings, has planted plenty of symbols along the path, yet avoided the banalities of religious calendar art.

This is one of the most interesting screen versions of the Gospels.

Let us say the spirit is hinted but the projection of it is weak.

This quirky 'Scope biblical spectacular is a lot more thoughtful and interesting than most.

Because the makers of this film took a chance by casting heartthrob Jeffrey Hunter as Christ, this was labeled I Was a Teenage Jesus (a play, of course, on the era's I Was a Teenage Werewolf). But the movie is far better than that tag would suggest.

works as a historical epic

Many of the scenes (especially the ones centered on Pilate and John the Baptist) are as good as anything in the history of the Biblical epic.

Nicholas Ray's biblical epic, toward the end of his career, is an intelligent film that finds the right balance between exteriors and interiors, stunning vistas and compelling characters.

... whereas detractors dismissed the films as I Was a Teenage Jesus, it's more accurate to describe it as Rebel With a Cause.

Although it may rely a little too heavily on spectacle, it features fine acting, direction, and photography. On Blu-ray it makes a splendid showing.

Audience Reviews for King of Kings

There might be some few individuals walking around unfamiliar with the story of Christianity's Messiah and so this film serves, in an entertaining way of course, to remedy that circumstance. Call it Introduction to Jesus 101. The familiar storyline is followed, true, but - because every story can be improved, yah? - some changes have been made to punch up the gist some, Hollywood-style. Jeffrey Hunter brings the desired look to the protagonist even if most dialogue is beyond his meager capabilities. For that reason, the unseen star of this production becomes Miklos Rozsa whose thundering majesty of a score is to the utmost and will remain what you best recall after viewing. Harry Guardino's Barabbas shines too.

Man, as crazy as Jeffrey Hunter looks in this, I had to check to make sure that this interpretation of the greatest story ever told wasn't "Jesus Christ Superstar", because he was looking so folk rocky and hippy-y that I was half expecting him to miracle up a guitar and start playing some songs by Phil Keaggy. Christian folk rock jokes aside, I'm at least glad to see that Hunter can lead his own odyssey, because he's been everyone's sidekick. He's been "Frank" James and never Jesse, the sailor "of" the king and John Wayne's tag-along in "The Searchers". Of course, now that I think about it, I would have liked to have John Wayne in here, because I'm a tad curious to see where that centurion he cameoed as in "The Greatest Story" came from. I was hoping to see him somewhere among the disciples, getting into crazy shenanigans on his journey to find his abducted niece, and along the way, they battle Native Americans, and Jesus ends up accidentally purchasing one of them as his wife. Actually, nevermind, because this film limps along enough as it is, so it doesn't need any of the dragging from "The Searchers". No, this film isn't that bad excessive in its length, yet this remains a lengthy film, and one that's not about to let you forget it. The film slugs along quite a bit here and there, dragging out dialouge, but most of all, points of superfluous meditation upon pure nothingness. Still, even with all of this dreamy dragging and over meditation, there are still a good deal of should-be impacting touches of either exposition or texturing that go glossed over, or at least they feel that way, as many scenes basically began and ended with narration. The reason why Orson Welles' narration, is so problematic (Ouch, it hurt to say that, because I'd never thought I'd have an issue with Orson Welles talking) is because it pretty much both reflects and secures the film's central misstep that stands above all else as the flaw of flaws. The ultimate problem with the film is that it is so very under dramatized, going comprised of matter-of-fact tones and meditation upon the story as simply something to be told, rather than interpreted. Sure, the overambitious storytelling that renders many points to fall limp as under dramatic and more matter-of-fact is a fault found in the then-later to arrive and immensely superior "The Greatest Story Ever Told" (Shut up, I liked it better), yet where those were faults amidst an epic of dramatic atmosphere and interpretation, this film is all but entirely composed of that matter-of-fact approach, not so much going uninspired as it is going overinspired to the point of only diluting substance, and with it, dramatic investment. However, with all of its squandered potential and underwhelmingness spawned from overambition, the film still stands its ground as far from the film of films of the King of Kings, yet still enjoyable watch, and certainly a nifty production. The production designs are neither terribly unique nor terribly eye-catching, yet what is well-produced stands handsome, as well as supplementary to the film's themes and messages of complexity within comforting simplicity. It's a worthy theme to accompany a worthy story, one that has been better told many a time since, yet still remains almost naturally compelling and just so here. The film has a certain resonance to it that's not terribly engrossing, yet gives the film a workmanlike charm to it that, when married with the constant activity, forms consistent entertainment value and engage just well enough to hold the audience over until things pick up an resonance does genuinely deliver, and does so with the help of, well, at least one performance. From Siobhán McKenna as Mother Mary to Brigid Bazlen as some obnoxious, spoiled and freakishly creepy teenager, not most, but every single actress within this cast is absolutely awful, and there are a fair couple of men who aren't that much better, while the rest of the cast stands as nothing more than workmanlike. Still, at the center of it all, there is a man who feels a tad underused, yet owns the spotlight for the time its on him, and not simply because he is its main focus. Jeffrey Hunter is most certainly no Max von Sydow, yet he is sobering and subtley charismatic in his presence as Jesus, not to the point of being transcendant, yet still to the point of being buyable, and compellingly so, subtley but surely earning your investment. I wish I could say that there's more to the film that gives it extra juice, yet with what aspects in which it does accel being considerably well-done, the film carries on as an entertaining piece. Overall, the film goes betrayed by its own ambition, being occasionally over meditative and often somewhat hurried, due to the very matter-of-fact and overinspired tone, yet the film mostly goes raised past these missteps on the winds of clever production, general compellingness, consistent charm and an upstandingly engaging and charismatic lead performance by Jeffrey Hunter, not to where the picture trascends averageness, yet still to where Nicholas Ray's "King of Kings" ultimately stands as an entertaining and ultimately quite watchable interpretation of the life of the, well, King of Kings. 2.5/5 - Fair

Fine portrayal of the Diety's life. King of Kings is a biblical epic produced by many of the same people responsible for the making of Ben-Hur. Although not quite as grand as it's predecessor, it hits the highlights of Jesus's ministry and explores the political climate of Israel. Jeffrey Hunter (Christopher Pike, Star Trek) is serviceable in the leading role but the supporting actors are the real treat. Robert Ryan delivers a subtle but powerful performance as John the Baptist. While other movies portray him as a wild, raving fanatic (Jesus of Nazareth, The Gospel of John) King of Kings suggests a more simple stoic character. My favorite scene is when Jesus hold his hand through the prison bars to free him from his doubts. Siobhan McKenna plays the Virgin Mary with sweetnesss and sympathy, Frank Thring (Pontius Pilate, Ben-Hur) a pompous, slow-witted Herod Antipas, Hurt Hatfield sutiably slimy as Pilate and Brigid Balzen (who could pass for Elizabeth Taylor's little sister) particulary good as the femme fatale Salome. The rest of the cast (Viveca Lindfords, lovely Carmen Sevilla, Rita Gam, Harry Guardino, Rip Torn etc.) deliver good strong performances that elevate the core virtues of the film. Costumes and sets are lovely (especially the palaces) cienematography is above average and Miklos Rozsa presents a magnificent musical score incredibly similar to his Academy-winning Ben-Hur. So why four stars? King of Kings spens a little too much time in Roman-Jewish politics while most of the teaching and miracles of Christ are told (rather than shown) from the perspective of others; it could have benefited from another half-hour to flesh out things like the woman at the well, the meeting with Nicodemus, the calming of the sea...etc.) Still this is a good film that hits the higlights of Jesus' life and deserves to be included in the group of sword-and-sandal dramas who do their job well.