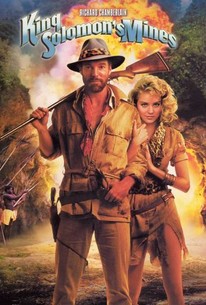 The action in this routine adventure film would be modeled on the enormously successful Indiana Jones but it is too much, too fast, too deja vu. It all starts when Jessie Huston (Sharon Stone, before stardom) talks adventurer Allen Quatermain (Richard Chamberlain) into helping her find her father, an archaeologist. He has been kidnapped in Africa by a Turk (John Rhys-Davies) and a German colonel (Herbert Lom) who are determined to extract the secret location of King Solomon's mines from the stubborn man. As Jessie and Quatermain head off into the unknown, there are crocodiles, lions, and other human beasts to conquer before the father or the mines hove into view. A sequel was soon to follow.

Innocent Choga
as Silent One

Rocky Green
as Silent One

Calvin Johns
as Silent One

Isaac Mabhikwa
as Silent One

Brian Kagure
as Silent One

Stanley Norris
as Silent One
View All

This may go down in cinematic history as the first movie where a kick to the head ends a dogfight between monoplanes.

The gargantuan spider monster and mutant hippopotamus creature toward the climax are definitely something different.

a largely unimaginative adventure, albeit not one that isn't entirely without its entertaining qualities, even if said qualities are best appreciated with a heavy dose of irony

King Solomon's Mines is frequently laughable. Nothing about the film is convincingly done.

A shallow and pale remake; stick with the 1950 version.

My my, its been a long long time since I saw this long lost adventure, I remember enjoying this on lazy afternoons as a little boy. Looking back now I'm amazed, could this be anymore like 'Indiana Jones'?! I mean seriously!. I can see I'm gonna have to control myself here, one of those films which has been slightly influenced by another bigger fish. By the time this film was released we had already been given the smash hit that was 'Dr Jones' with two rip roaring adventures. Of course the character of 'Allan Quatermain' dates back well before the Lucas/Spielberg creation but this film has clearly gone down that route heavily, so much so that even the score is infringing on copyright laws if you ask me. The story is as you would expect from an African adventure. 'Quatermain' is hired by the very blonde Sharon Stone (yes that one) to find her father. They do so and on his wishes continue to search for the lost mines. On their trail is the German Imperial military led by their ruthless Colonel and an even more ruthless Turkish slave trader. I'm unsure how close to the original novel this film is but I'm also pretty sure the film has been exaggerated quite a bit. The beginning of the film is almost the same as the 'Raiders of the Lost Ark' Cairo sequence, right down to the same stunts and same action!. From there the film pretty much includes every African adventure cliche imaginable from cannibal tribes, wild lions, fighting on top and underneath trains, Biplane action, sweaty locals as spies and informants, stampeding elephants, alligator pits, booby trap laden caves etc...accept in this film there are monsters too. The only real difference from a certain other franchise is the fact the story is set within British Colonial times (mid to late 18th Century). So the German baddies aren't Nazi's and of course 'Quatermain' is suppose to be a British officer/big game hunter, not archaeologist. Although Stone's character is studying archaeology. Its fun to look back at the cast now, with a very young Sharon Stone acting so badly being the drippy blonde princess who constantly needs rescuing. Chamberlain is the hero 'Quatermain' and does look the part, his outfit is appropriately cliched and cheesy in that typical British Colonial style and with a cool trademark shotgun. Shame about the US accent though. Then we have Rhys-Davies playing pretty much the same kind of character he played in 'Indy' accept this time he's a baddie, but he looks exactly the same. Finally the other main bad guy is Herbert Lom playing the stereotypical porky, curly tashed, oldschool gruff bald German Colonel who cares little about his men and beats natives with his crop. Your typical fat WWI era bratwurst sucking Kraut officer. Interesting observation, Chamberlain has twice made films back to back for a franchise. This film and its sequel plus the Richard Lester 'Three Musketeers' films. The film isn't meant to be a serious action film of course, its light hearted and very jokey but nowhere near as violent as 'Indy'. Its all very tongue n cheek here, the action is tame and very much in the same vain as old black n white films of the same nature. Bluescreen is highly evident and quite nasty looking at times, obvious plastic sets and props, stock footage heavily used etc...The only thing that has a sense of quality about it is the real location work, and I guess the sets were quite large, impressive scale at times. A total campy rollercoaster of continuous watered down action, the finale inside the mines gets even more ludicrous. One thing always baffles me in films like this. When the building or cave or whatever is totally coming down, self destructing with extreme levels of mortal danger. Why do the bad guys still insist on trying to kill the good guy despite the fact they are clearly running out of time to escape and save their own life?. Run away, live to fight another day geez!.

great adventure flick, watch with alan quatermain and the lost city of gold