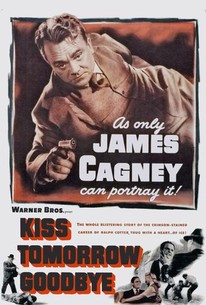 Based on a novel by Horace McCoy (They Shoot Horses, Don't They), Kiss Tomorrow Goodbye offers James Cagney at his nastiest. The star plays career criminal Ralph Cotter, who gets things started by violently busting out of jail, then murdering his partner in crime. Seeking out female companionship, he "courts" his ex-partner's sister Holiday (Barbara Payton) by beating her black and blue. After committing a robbery, he is approached by two crooked cops who want a piece of the action. Blackmailing the cops, Cotter gains control of the situation. Is there any way to stop this fascinating creep? Filmgoers in Ohio never found out, because Kiss Tomorrow Goodbye was banned in that state as "a sordid, sadistic presentation of brutality and an extreme presentation of crime with explicit steps in commission." Supporting Cagney are Luther Adler as his equally crooked lawyer, Ward Bond and Barton MacLane as the dishonest cops, and Cagney's brother William (who produced the film) as Ralph Cotter's brother.

Jack Gargan
as Clerk of Court

Frank Marlowe
as Joe, the Milkman

I rented this film because of Barbara Payton, little did I know that James Cagney would be the main star. Cagney was outstanding in his role as a gangster, and Payton played his crime gal and did an excellent job. Its a early Black and White film that will hold your interest. We have crooked detectives, a pissed off girlfriend and a secret lover, everything that makes a good film. A 4 star film.