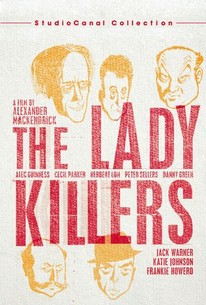 Critics Consensus: The Ladykillers is a macabre slow-burn with quirky performances of even quirkier characters.

Critics Consensus: The Ladykillers is a macabre slow-burn with quirky performances of even quirkier characters.

Critic Consensus: The Ladykillers is a macabre slow-burn with quirky performances of even quirkier characters.

Music professor Alec Guinness rents a London flat from sweet old lady Katie Johnson. He tells her that, from time to time, several other musicians will visit in order to rehearse. In truth, Guinness can't play a note, nor can his visitors: he's a criminal mastermind, holding court over a gang of thieves, including the likes of punkish Peter Sellers, homicidal Herbert Lom and punchdrunk Danny Green. The gang uses Guinness' flat as headquarters as they conceive a daring 60,000 pound robbery. After pulling off the job, the gang stuffs the loot in a railway station locker. To avoid detection, Guinness convinces the ever-trusting Johnson to pick up the money. Through a series of comic complications, Johnson returns home with a police escort, with neither the woman nor the bobbies suspecting that she's carrying a fortune in her suitcase. Mistakenly believing that Johnson has ratted on them, the gang reluctantly plans to eliminate her. The Ladykillers won an Oscar nomination for William Rose's screenplay, and a BFA award for veteran character actress Johnson. ~ Hal Erickson, Rovi

Fred Griffiths
as The Junkman

Kenneth Connor
as The Cab Driver

Critic Reviews for The Ladykillers

One of the great Ealing comedies of the 1950s.

Most of the slapstick set pieces warrant a polite smile rather than a hearty guffaw.

A shining light of the "Ealing comedies," this 1955 crime caper remains as entertaining today as it did then.

Under Alexander Mackendrick's direction, all of these actors have a chance to shine... It's absolutely so much fun to settle back and watch these actors do what they do best.

It takes all these wonderful twists and turns. It's very funny and clever.

The script by American William Rose is as close to perfection as a film writer can get.

This film does a wonderful job of combining dark humor and classic British comedy.

Alec Guinness is somewhat less believable than usual in this fast and ruthless British crime comedy. But Katie Johnson is nothing short of perfect as a prim old widow whose gentility terrifies the gang.

This comedy thriller is the best film to come from Ealing Studios for some time, and the combined talents of William Rose (writer) and Alexander Mackendrick (director) have produced a witty and original diversion.

Audience Reviews for The Ladykillers

Not as entertaining as the remake I felt, but was good to be able to compare the two, especially with the location differences as well.

A hilarious story, I loved it.

I didn't enjoy this quite as much as the person who recommended it to me, but the little old lady is worth the price of admission. UPDATE: Saw this again today, and was a little more impressed. Although I still think it starts off rather slow, it has a deliciously twisted ending. I remember that Kind Hearts and Coronets had a similar arc. I'm wondering if that's the style of older Brit comedies in general. Maybe I shouldn't be in such a hurry to turn them off.

Absolutely terrific. Funny and charming. I love this movie.