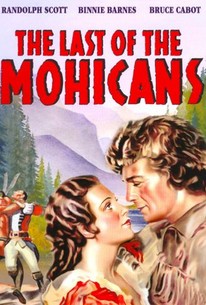 The Last of the Mohicans Photos

Randolph Scott has one of his best roles as Hawkeye in this exciting film adaptation of James Fenimore Cooper's often filmed novel. During the brutal French and Indian War, Hawkeye is prevailed upon to escort Major Duncan Heyward (Henry Wilcoxon), and the two daughters of Fort William Henry commander Colonel Munro (Hugh Buckler) -- Alice (Binnie Barnes) and Cora (Heather Angel) -- to safety through enemy lines. Hawkeye is assisted by his Indian friend Chingachgook (Robert Barrat), and Uncas (Philip Reed), Chingachgook's son; the two are the last survivors of the Mohican tribe. During their travels to the fort, Alice falls in love with Hawkeye, while Cora falls in love with Uncas. But along the way, the band is continually harassed by the demonic Huron Indian Magua (Bruce Cabot). Magua causes the deaths of Cora and Uncas, while the British are attacked by the Hurons and the French and forced to flee Fort William Henry. Hawkeye is taken prisoner by the brutal Hurons and Maj. Heyward must organize a band to rescue Hawkeye before he is tortured to death.

Will Stanton
as Jenkins

Reginald Barlow
as Duke of Newcastle

Claude King
as Duke of Marlborough

Critic Reviews for The Last of the Mohicans

... an exciting and involving screen version, with Scott as a strong-willed but civilized Hawkeye ...

Audience Reviews for The Last of the Mohicans

There are no featured audience reviews yet. Click the link below to see what others say about The Last of the Mohicans!

The Last of the Mohicans Quotes