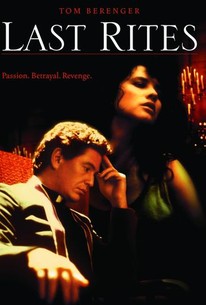 In Last Rites a serious thriller on a sensational topic, a priest falls in love with a woman he is protecting. Father Michael (Tom Berenger), a priest with family ties to the mob, helps a woman on the run. Angela (Daphne Zuniga) is the mistress of a murdered Mafia Don, now being hunted by hitmen hired by the Don's infuriated wife. As Father Michael realizes he is falling in love, both his faith and his vows are severely tested. Directed with restraint and respect for the subject matter by Donald Bellisario, the film still caused controversy and was criticized because of love scenes between the priest and the woman. Despite this criticism and despite the fact that the film is somewhat slow and predictable, Last Rites has fine performances by its cast and is an entertaining thriller.

Tony Montanaro
as Man at Cemetery

An idiotic thriller that becomes increasingly preposterous as it goes.

There are no featured audience reviews yet. Click the link below to see what others say about Last Rites!