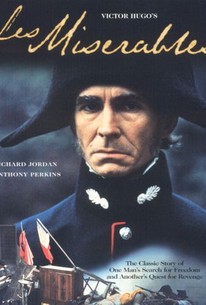 The 1979 TV movie Les Miserables was advertised as the 12th feature film to be based on the 1862 Victor Hugo novel (and that was a modest estimate). This time, Richard Jordan is the persecuted French ex-convict Jean Valjean, and Anthony Perkins is the relentless police officer Javert, who dogs Valjean's trail for forty years. Screenwriter John Gay does a nice compression job on Hugo's mammoth novel, including most of the familiar episodes ("The Bishop's Candlesticks" etc.) and reintroducing several vignettes that had been ignored by earlier adaptations. Norman Rosemont produced Les Miserables on a lavish scale in both England and France, populating the cast with several of Europe and America's best actors (including veteran Claude Dauphin, in his last screen appearance). Les Miserables debuted as a three-hour "IBM Special" on December 27, 1978.

Flora Robson
as The Prioress

Even if it's mostly one for the Les Misérables completionists, they're not likely to walk away disappointed.

Pretty good movie. May have to read the novel...

My favorite telling of "Les Miserables" with Anthony Hopkins as Javert and Richard Jordan as Jean Valjean. It depicts many notable events from the book. I liked the grungy prison scenes at the beginning and the murky sewer chase at the end. The music is quite effective. It's a long story, but so was the book. It has a made-for-TV miniseries feeling to it. I wish a decent version of this would come to region 1 DVD.