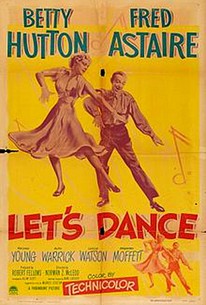 Fred Astaire and Betty Hutton make a surprisingly copacetic screen team in Let's Dance. Hutton plays a more sedate role than usual as war widow Kitty McNeil. Not wishing to have her young son Richard (Gregory Moffatt) grow up in the stiff and stuffy environs of her Boston in-laws' mansion, Kitty sneaks off with the kid and resumes her prewar show-business career. She is reunited with her USO dancing partner Donald Elwood (Astaire), who hopes to give up performing in favor of the business world. Inevitably, Kitty and Donald resume their old act, while, equally inevitably, Kitty's Bostonite grandmother-in-law Serena Everett (Lucille Watson) sets the legal wheels in motion to gain custody of little Richard. Fred Astaire manages to match Betty Hutton's patented raucousness during the hillbilly musical number "Oh, Them Dudes", though he is given the opportunity to do the sort of dancing he does best--notably a brilliant routine atop and around a piano.

Milton Delugg
as Himself

Peggy O'Neill
as Woman
View All

There are no critic reviews yet for Let's Dance. Keep checking Rotten Tomatoes for updates!

Silly bit of nonsense put over by the talented team of Fred Astaire and Betty Hutton. Their styles aren't seamlessly matched as was the case with Astaire and Ginger Rogers but they are still a breezy pair. The film is also helped by having a strong supporting cast with pros Lucile Watson, Ruth Warrick and Roland Young adding nice touches throughout.