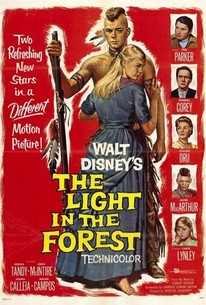 Those who learned to dislike Conrad Richter's novel The Light in the Forest when it was required reading in high school will be pleasantly surprised by this Disney adaptation. In his second film appearance, James MacArthur plays Johnny Butler, a white youth who was captured by the Delaware Indians in infancy. In 1764, a peace treaty is signed between the Delaware and the British, requiring that all white captives be returned to their families. But 18-year-old Johnny, now known as True Son and now thoroughly assimilated into the tribe, violently resists being torn away from the only life he has ever known. Kindly Indian scout Del Hardy (Fess Parker) tries to help Johnny through his transitional period; the same cannot be said by Johnny's Indian-hating Uncle Wilse (Wendell Corey), who vows to kill every Delaware he meets. Only by defeating Wilse-and, by extention, his own inner demons-will Johnny ever be able to readjust to the white lifestyle without totally turning his back on his adoptive Indian family. Carol Lynley makes her screen debut as Shendandoe, Johnny's white sweetheart; likewise making his entree into films is TV director Herschel Daugherty. Partially filmed on location in Tennessee, Light in the Forest benefited from the expertise of technical advisor Iron Eyes Cody.

Rafael Campos
as Half Arrow

Critic Reviews for The Light in the Forest

Slow-moving but pleasant is this Walt Disney production, based on the Conrad Richter novel...

There are no featured reviews for The Light in the Forest at this time.

The Light in the Forest Quotes