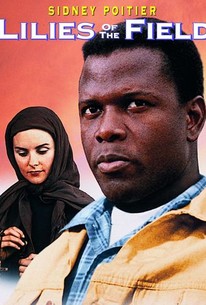 Lilies of the Field Photos

In this film, a traveling laborer meets five nuns in the Arizona desert. The appearance of Homer Smith convinces the Mother Superior he is an answer to her prayers. He wins the hearts of the nuns and the thanks of the town, as initial reluctance turns into public acceptance.

News & Interviews for Lilies of the Field

View All Lilies of the Field News

Critic Reviews for Lilies of the Field

Lilies of the Field is a funny, sentimental, charming and uplifting film, in which intelligence, imagination and energy are proved again to be beyond the price of any super-budget.

Many factors combine in the overall success of the film, notably the restrained direction by Ralph Nelson, a thoroughly competent screenplay by James Poe, and, of course, Poitier's own standout performance.

It might be significant as an early independent movie made good, but Poitier got better when he got angrier for In the Heat of the Night four years later.

An uplifting film that cemented the reputation of its star.

Despite the divergence in faith and culture, a tolerant ecumenical respect characterizes the relationship between Smith and the sisters.

Poitier's performance is a sheer joy to behold, and Lilia Skala is simply brilliant as Mother Maria.

There's not much dramatic urgency to the story, but that's perfectly fine: This is the sort of picture that gives wholesomeness a good name, and its life lessons are imparted in a leisurely and unforced manner.

Simple and optimistic as the images, but provided with a captivating personality. [Full Review in Spanish]

A beautifully understated work, built on the dignity of Poitier's warm gravitas, and told with a gentle and disarmingly moving confidence.

One of the most gentle and affecting stories about faith and generosity ever committed to film.

This was a small, low-budget picture that went straight for the heart and succeeded critically as well as financially.

Audience Reviews for Lilies of the Field

It's all about timing, and the time (1963) was right for this hopefully uplifting take on racism. Sidney Portier plays a traveling construction worker gulled into building a chapel for some transplanted East German nuns out in the middle-of-nowhere. A lot of it is obvious pandering anymore, sure, but the sentiment beneath allows some little forgiveness for it's many failings (like the obvious overdubbing of Portier's voice for the sing-along portions.

A laborer accepts a group of nuns' requests to build a church. Is it possible for a film to be both evangelical and light-hearted? They seem like a contradictory adjectives, but somehow the delightful exuberance of Sidney Poitier make the film work. He has an easy charm that contrasts nicely with the nuns' severity. The film's themes, include faith and stewardship, aren't heavy-handed or explored in any depth, but they're there, and the film is as catchy as the gospel tune that Poitier repeatedly sings. Overall, this isn't a canonical, except for the fact that Poitier became the first African-American to win Best Actor, but it's a fine time and entertaining couple of hours.

Poitier does his usual thing..this time giving a grand performance with a bunch of nuns. While the move is good, it does border on poor sentimentality. For this reason alone, I deduct a half star.

Sidney Poitier won an Oscar for his role in this story of the unusual collaboration between a group of german nuns and a traveling construction worker. He plays the unusually named character "Homer Smith" (or as the mother superior called him, 'SCHMIDT!!'), a who's man driving across the south-western United States looking for work when he stumbles upon a small farm that turns out to be a rural convent. When Mother Maria (Lilia Skala) gets ahold of "Schmidt", she convinces him to repair the roof, and leads him to believe he will be paid for his service. She also tells him he has been sent by God to help them, so Schmidt should know what he's gotten himself in for. After a few days of general helping out, Mother Maria lets Schmidt know the real reason she wants him there: she wants him to build a church for them. Homer at first refuses, but soon caves in as he feels something for the women, and a white man's suggestion that he's too inferior to do such a thing lights a fire in him. He takes a job driving a bulldozer in order to make money for food (their spartan, 'one egg an a glass of milk' catholic breakfasts aren't enough to feed a man doing all this work), and soon, with the help of the community, is building the church just as Mother Maria believed he would all along. This film is quite unusual for it's time, in that a black man is playing a role that could've just as easily gone to a white man (apart from a brief scene involving racism, which could've been easily re-written), and race doesn't really play a part in this movie. In fact, this film probably focuses less on race than many of the modern films of today would, given the same subject matter. The nuns, other than Mother Maria, are virtually indistinguishable, (perhaps because they only speak in german) and are underdeveloped as characters. Mother Maria herself is quite a character though, she refuses to give any thanks or credit to Homer for all the work he does (and the fact that she's he one in need and doesn't have a cent to pay him with, makes her arrogance all the more inconsiderate). The fact that the character is being played by a black actor gives the whole relationship an uncomfortable aspect. Poitier does give it his charming all, and a few scenes are especially memorable, such as when Homer teaches english to the nuns. Overall however, this film is incredibly lightweight and in constant danger of running out of developments interesting enough to keep it going. A pleasant diversion, none-the-less.

Lilies of the Field Quotes