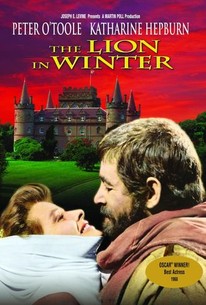 Critics Consensus: Sharper and wittier than your average period piece, The Lion in Winter is a tale of palace intrigue bolstered by fantastic performances from Peter O'Toole, Katharine Hepburn, and Anthony Hopkins in his big-screen debut.

Critics Consensus: Sharper and wittier than your average period piece, The Lion in Winter is a tale of palace intrigue bolstered by fantastic performances from Peter O'Toole, Katharine Hepburn, and Anthony Hopkins in his big-screen debut.

Critic Consensus: Sharper and wittier than your average period piece, The Lion in Winter is a tale of palace intrigue bolstered by fantastic performances from Peter O'Toole, Katharine Hepburn, and Anthony Hopkins in his big-screen debut.

The Lion in Winter Photos

The most royal of the cycle of '60s films dealing with the history and castle intrigues of medieval England, Anthony Harvey's The Lion in Winter returns in a new 4K restoration by Studiocanal. At Christmas Court in 1183 King Henry II argues with his estranged wife, Eleanor, over whether Prince John or Richard shall inherit the throne. Complicating matters, King Philip II of France seeks his own fortune by demanding his sister Alais, currently Henry's mistress, be betrothed to Richard, all the while stirring insurrection among all of Henry's sons toward their father.

Katharine Hepburn
as Eleanor Of Aquitaine

O.Z. Whitehead
as Bishop of Durham

Critic Reviews for The Lion in Winter

All that's ever mattered about The Lion in Winter are Hepburn and O'Toole, and the pleasure we take from watching two masters inspire each other to greatness. Scenery chewing has rarely been so artful.

[A] humdinger of medieval powerplay.

Henry and Eleanor are reduced to a TV-sized version of the sovereigns next door, their epic struggle shrunk to sitcom squabbles.

James Goldman's screenplay, so chic and sophisticated to the ears of suburbanites, is chock-full of the worst kind of sophomoric fiddling with what Goldman takes to be genuine highfalutin lingo.

An intense, fierce, personal drama put across by outstanding performances of Peter O'Toole and Katherine Hepburn.

Director Anthony Harvey opened up Goldman's play into authentic spaces far from any proscenium, and remained faithful to an energetic drama propelled by its performances and dialogue.

Plenty of swords and knives make appearances in The Lion in Winter, but none can possibly cut as deep as the caustic dialogue.

O'Toole's bluster echoes off the walls, leaving no space for anything else.

Flawed and a little too impressed with Its own accomplishments, The Lion in Winter is, nevertheless, something to see.

One of Hollywood's great epics, a film often overlooked in favor of some of the era's flashier spectacles.

The film's best asset is its relentless and even exasperating unwillingness to pin itself down to one thing becoming a film that's working on all levels.

Audience Reviews for The Lion in Winter

wonderful war of words among masters.

King Henry II invites his estranged wife and three children to celebrate Christmas with his mistress, and the three sons vie for the throne. Only slightly better than the remake, this classic film, for which Katharine Hepburn won the Best Actress Oscar, is more fast-paced and sharply executed. Writer James Goldman's sharp wit, including such lines as "Quiet, darling, Mummy's fighting" and "If I was on fire, no one would pee on me to put me out" "Let's strike a flint and see," becomes clearer when put in the hands of such technically savvy actors are Hepburn, Peter O'Toole, and Anthony Hopkins. But as with the remake, I struggled to understand what the backbone of this film is beyond family melodrama. There were a few moments when, looking at Hepburn's world-weary, tear-stained face, I thought that it was bemoaning the ravages of age, and indeed, this is the best that I can come up with, but I can't understand how this theme interacts with the political plot. Overall, like the Stewart/Close version, Lion in Winter is fun to watch, and even though I hate Hepburn normally, I found her performance compelling here.

Riveting. Dialogue of razor-sharp wit, layers of motives and intimate revalations, and captivating performances. Can't find a modern movie with dialogue this smart.

The old king (O'Toole) must choose an heir thus beginning this chess game of plots and counter- plots between the family members involved. Included are his sons, among them Richard (Hopkins) and his mother (Hepburn). Riveting though talky this is the kind of costumer most aspire to be. O'Toole and Hepburn are forces of nature.

The Lion in Winter Quotes