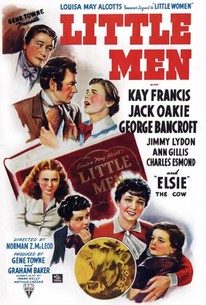 Little Men, Louisa May Alcott's followup to her successful novel Little Women, has never truly adapted well to the screen, though this 1940 version is better than most. Kay Francis stars as the all-grown-up Jo March, now in charge of a private school for young boys. Her most contentious charge is rebellious Dan (Jimmy Conlin), who finally learns the rudiments of gentlemanly behavior from the firm-but-gentle Jo. Despite its huge and talented cast, the film is handily (and appropriately) stolen by Jack Oakie as an affable con artist named Willie the Thief. Also on hand is the original Elsie the Cow (but where's Elmer and his glue?) A loser at the box office, Little Men is currently in wider circulation than ever before thanks to its Public Domain status (also available in the P.D. market is the 1933 version of Little Men, produced by Monogram).

Elsie the Cow
as Buttercup

Stanley Blystone
as Bartender
View All

Louisa May Alcott's novel is somewhat dated and somewhat vulgar on the screen. [Full review in Spanish]

There are no featured audience reviews yet. Click the link below to see what others say about Little Men!