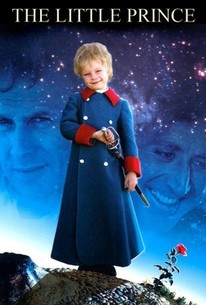 Stanley Donen directed this lugubrious musical fantasy based on the classic Antoine de Saint-Exupery children's parable, featuring a musical score by Alan Jay Lerner and Frederick Loewe -- their first film score since Gigi. The simple story concerns a French aviator (Richard Kiley) who crashes his airplane in the middle of the Sahara desert and comes upon a young blonde prince (Steven Warner) from another planet. The Little Prince tells the pilot that he is inspecting the universe and stays in the desert long enough to convey to the pilot his impressions of the earth and stories of other planets he has visited. In a supporting role as a serpent that the Little Prince met amongst his travels in the universe, Bob Fosse stops the show with a slithery dance routine.

Steven Warner
as The Little Prince

Richard Kiley
as The Pilot

Gene Wilder
as The Fox

Joss Ackland
as The King

Clive Revill
as The Businessman

Victor Spinetti
as The Historian

Graham Crowden
as The General

Donna McKechnie
as The Rose
View All

Critic Reviews for The Little Prince

Tender fable may appeal more to adults than kids.

Audience Reviews for The Little Prince

A beautiful musical adaptation that captures the essence and soul of Saint-Exupery's classic book, even if the sight of actors playing animals must feel strange for some, and benefits from gorgeous visuals and fantastic performances - especially by the young Steven Warner.

I thought the film captured the essence of the book beautifully, though some of the pilot's songs were a bit campy and over-dramatic. Still a classic :)

So what if Little Prince is adapted on-screen?The big mistake is Donen on the directing chair.The glory of the past and the Funny Faces don't work on this children's movie.A wonderful performance by Fosse (Jackson totally ripped of the dance moves) is not enough to give this an alternative credit.On my behalf,just a simple musical....and an insult to Exupery's fans!!!

Nothing can compare to the book (which to this day is one of my favorites) but this is a fun interpretation of the story.