The Little Shop of Horrors1960 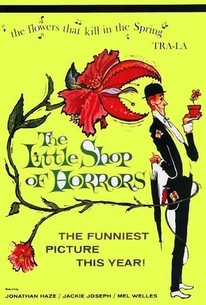 The Little Shop of Horrors Photos

Seymour is a young man who works in a flower store. He manages to create a carnivorous plant that feeds on human flesh. Nobody knows about it, so Seymour and the plant become good "friends". The plant needs food to grow up, so it convinces him to start killing people.

News & Interviews for The Little Shop of Horrors

View All The Little Shop of Horrors News

Critic Reviews for The Little Shop of Horrors

Before inspiring all of the catchy musical numbers, Corman's film remains an absurd, slapstick comedy with a sharp mix of stark depression.

Whether the film fully lives up to its reputation is another matter, but there is no doubt that The Little Shop of Horrors has earned its small place in cult movie history.

Aside from all this surface nonsense, there's something interesting about the film (perhaps all the emphasis on eating and mouths).

A campy Corman classic. Drink some beers and have fun with it!

Audience Reviews for The Little Shop of Horrors

Think of a roomful of people all doing Jerry Lewis' New York Jew boychick routine for a little over an hour and you've got an idea of the comic goals sought after here, like an Mad magazine parody brought to life already. There are some laffs, granted, but let's remember it's a Corman effort, with the corresponding amount of thought behind it. Cute.

saw the orignal now yay!! i liked it i think i preferred the remark but i did like this it was funny as well!!

Like the seminal 1986 musical with a similar title, this 1960 film has some very sick dark humor, this shorter film actually very innovative and grotesque for the time it was set in. Much of the musical and the movie it is based of off are similar in some respects: the character of Audrey is bubble gum adorable but lovable, Seymour is down and out, and strangely the voice of the plant is still very deep and soulful. A bit less upbeat as the remake, Little Shop was filmed in only two days, which shows in the overhead tracking shots, and some scenes where the dialogue trips all over itself. Still, between the great scene involving Seymour feeding Audrey Jr. human appendages, and the hilarious humor this is certainly a classic. Besides that we get to watch a very young Jack Nicholson as a deranged dental patient, which Bill Murray would soundly emulate years later with the help of dentist Steve Martin. Yes, the ending is significantly different, playing out more like a morality tale than a science fiction/fantasy crossover, but with the nostalgia angle of a black and white picture that wasn't given all too much confidence, it was surprisingly good.

The Little Shop of Horrors Quotes