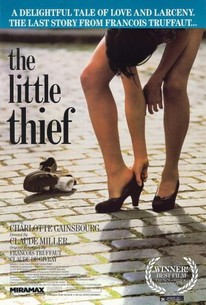 The Little Thief stars Charlotte Gainsbourg as Janine, a 15-year-old criminal struggling to survive in post-World War II France. The character of Janine was created by Francois Truffaut, and was intended for inclusion in the director's debut feature The 400 Blows. However, she was cut from the narrative, due to time restraints, and Truffaut was never able to return to her character before his untimely death. Based on a story written by Truffaut with Claude de Givray, The Little Thief is directed by Truffaut's longtime assistant Claude Miller, and is much in the spirit of the late filmmaker's work.

Florent Gibassier
as Carpenter
View All

The Little Thief tells this interesting story in a somewhat frustrating way.

There are no featured reviews for La Petite Voleuse (The Little Thief) at this time.