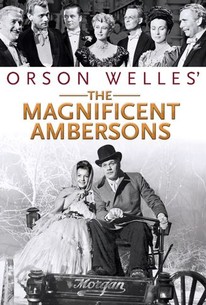 Orson Welles' followup to Citizen Kane (1941) was utterly different from Kane in style and texture, but just as brilliant in its own way. Writer/director Welles does not appear on camera, but his voiceover narration superbly sets the stage for the movie's action, which fades in valentine fashion on Amberson Mansion, the most ostentatious dwelling in all of turn-of-century Indianapolis. Its mistress is the haughtily beautiful Isabel Amberson (Dolores Costello). When Isabel's beau, erstwhile inventor Eugene Morgan (Joseph Cotten), inadvertently humiliates her in public, she breaks off the relationship and marries colorless Wilbur Minafer (Donald Dillaway). The neighbors are certain that, since Isabel can't possibly love Wilbur, she will spoil her children rotten. As it turns out, she has one child, George Minafer (Tim Holt), and that one is enough as far as the rest of Indianapolis is concerned. There are those who live for the day that the arrogant, insufferable George will get his comeuppance. When George returns home from college, his mother and grandfather (Richard Bennett) hold a gala reception in his honor. Among the guests is the older-and-wiser Eugene, now a prosperous automobile manufacturer, and his pretty daughter Lucy (Anne Baxter). George takes to Lucy immediately, but can't warm up to Eugene, especially after learning from his uncle Jack Amberson (Ray Collins) and his maiden aunt Fanny (Agnes Moorehead) that Eugene and Isabel had once been sweethearts. After the death of Wilbur Minafer, the widowed Eugene feels emboldened enough to propose to Isabel again. This time she is willing, but the obstreperous George refuses to allow his mother to see Eugene. His imperious bullheadedness will lead to tragedy for all concerned--and, at long last, a chastened George Minafer will indeed receive his comeuppance. The film's real villain is not George but that old intangible bugaboo called "Progress." As the automobile age comes to fruition, the elegant, cloistered lifestyle of the Ambersons fades from view, finally disappearing altogether. This is superbly foreshadowed in the "winter outing" sequence (filmed in an L.A. icehouse) in which George's two-horse sleigh is abandoned in favor of Eugene's clunky horseless carriage. Welles evokes performances that his actors seldom (if ever) matched in later years; even the very limited Tim Holt is wholly believable-and even a bit pitiable-as the blinkered George Amberson Minafer. The current version, however, is but a pale shadow of Welles' original concept. Out of time and overbudget, the movie previewed badly and was eventually sliced down to an abrupt 88 minutes (by, among others, editor Robert Wise, who would go on to direct such films as West Side Story and The Sound of Music). Even though the film therefore must be regarded as a marred masterpiece, the remaining two-thirds of Welles' original concept is still a thrilling cinematic experience, especially whenever Agnes Moorehead is on the screen. ~ Hal Erickson, Rovi

Dorothy Vaughan
as Woman at Funeral

Elmer Jerome
as Man at Funeral

Bob Cooper
as George as a Boy

Sam Rice
as Man at Funeral

Bobby Cooper
as George as a Boy

James Westerfield
as Cop at Accident

William Blees
as Youth at Accident

Orson Welles
as Narrator, The Narrator
View All

News & Interviews for The Magnificent Ambersons

View All The Magnificent Ambersons News

Critic Reviews for The Magnificent Ambersons

Film snobs like to say that this, the second feature from Orson Welles, is even better than Citizen Kane. That's a stretch, but it's certainly exquisitely beautiful film-making - there are frames in there to die for.

Even in this truncated form it's amazing and memorable.

Ambersons is not another Citizen Kane, but it is good enough to remove Director Welles for keeps from the novice or one-picture-prodigy class.

Although reams have been written about the mutilation of Orson Welles' second feature, what remains of it is nevertheless a major accomplishment.

While telling this story, haltingly and clumsily, the movie runs from burdensome through heavy and dull to bad. It stutters and stumbles as Welles submerges Tarkington's story in a mess of radio and stage technique.

Orson Welles devotes 9,000 feet of film to a spoiled brat who grows up as a spoiled, spiteful young man. This film hasn't a single moment of contrast; it piles on and on a tale of woe, but without once striking at least a true chord of sentimentality.

After the neorealistic revolution of Citizen Kane's cinematographic achievement, then, The Magnificent Ambersons becomes the consecration, in some sort of stripped-down and ultimately classical way, of a new mode of screen narration.

Welles has a knack for heart-rending stories rife with comeuppance, tragedy, remembrance, doomed romance, and, most superbly, the pleasures of forgiveness and closure.

True, there are wonderful authentic period touches, excellent dramatic photographic work and fine direction of a wonderful cast. Welles has employed so much subtlety, however... that the resultant effect is vague and even meaninglessly depressing.

Orson Welles continues to be incredible, super original, and an unsurpassable artist from the beginning to the end of the movie. [Full Review in Spanish]

In trying so feverishly to be realistic, Welles has drained the life pretty much out of the Indiana family of whom Tarkington once wrote so straight-forwardly that he won a Pulitzer prize for his efforts.

Audience Reviews for The Magnificent Ambersons

Orson Welles was reportedly furious when this film was cut to smithereens by his studio, and his editor, Robert Wise, while he was elsewhere, filming in South America. He believed that this could have been better than "Citizen Kane," his magnum opus. While it's hard to be conclusive in that assessment, I can say that this film is just as big and concrete as his first. This film too looks at the lives of people through many years, and shows their transformations from idle youths to confident adults. The Amberson family members are comprised of a group of fascinating individuals who each want things they apparently can't have. The Industrial Revolution's evolution of technology leads to the family's undoing, as their neighbor's wealth grows and theirs' dwindles. Their matriarch and patriarch fall, the aunt and nephew often struggle against each other on escalating levels of cruelty, and relationships suffer for it. It's a beautiful film that obviously could have been much bigger, much darker in its take on the family. Sadly the original rough cut of the film was destroyed by the studio, probably to keep megalomaniac Welles from putting his film back together. This is an amazing addition to Welles' canon and is beautiful in both scope and story.

That staircase. After watching The Magnificent Ambersons, I'm still struck by the staircase of the Amberson mansion. Director Orson Welles somehow gives the impression the staircase winds up story after story, hundreds of feet into the rafters, and without a window to be found. The Ambersons live in this mansion of nitemares, all shadows and endless, winding stairs. The Ambersons are a family of great Shakespearean tragedy. Eugene (Joseph Cotten) and Isabel (Dolores Costello) are sweethearts until Eugene embarrasses himself (when coming to serenade Isabel, he accidentally trips and smashes his bass fiddle) and becomes the laughing stock of the town. Isabel can't settle for any imperfection as she's the daughter of a very important family. She chooses security over love, and marries a plain but well off businessman. When their child comes, he's spoiled horribly, and grows into an even more obnoxious adult. Meanwhile, Eugene has returned to his hometown a successful car manufacturer, recently widowed and with a beautiful daughter. Isabel's son, George (Tim Holt) falls in love with Eugene's daughter, or at least what passes for love in someone so self-absorbed and egotistical. Eugene and Isabel strike up where they left off, much to the envy of the jealous Aunt Fanny (Agnes Moorehead). Fanny schemes to convince George to intervene in the newly re-burgeoning relationship between Eugene and his mother, and the results are tragic for all involved. Aunt Fanny and George are a pair of lost souls, George especially is filled with impudence yet doesn't really understand why things happen around him the way they do, only that they don't happen the way he wishes. Visually, there aren't alot of films as stunning and on as many different levels as this. It's a unique vision and just about as daring a film (visually) as has ever been made. Welles original edit of the film has been lost and bastardized through the years, and the film's final tone of forgiveness rings somewhat at odds with the rest of the film's general feel. However unfortunate this situation may be, it matters little when every frame of the Magnificent Ambersons is a work of art in it's own right.

I'd love to Welles' actual version of this, becuase this pretty boring.

I enjoyed it a little bit more than Kane.