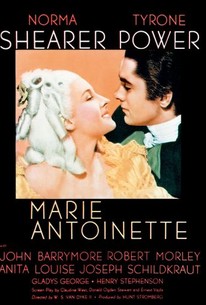 This historical drama focuses on the Austrian princess who became a queen (Norma Shearer) via marriage to the future King of France, Louis XVI (Robert Morley). When her marriage proves loveless, she begins an affair with a Swedish count (Tyrone Power), who stays with her until she becomes queen--upon the death of Louis XV (John Barrymore). Meanwhile, unhappy revolutionaries led by the Duke of Orleans (Jose Schildkraut) plan to overthrow the government and when they succeed, the King and Queen land in prison. The Swedish nobleman then returns, hatching a plan to save her life.

Joseph Schildkraut
as Duke of Orleans

George Zucco
as Governor of Conciergerie

Ian Wolfe
as Herbert, the Jailer

Richard Alexander
as Man with Pike

Olaf Hytten
as Boehmer the Jeweler

Zeffie Tilbury
as Dowager at Birth of Dauphin

Frank Jaquet
as Keeper of the Seal

Bea Nigro
as Woman at the Opera

Billy Engle
as Man with Goblet

Helene Millard
as Lady-in-Waiting to DuBarry

Dorothy Christy
as Lady-in-Waiting to DuBarry

Frances Millen
as Lady-in-Waiting to DuBarry

Mimi Olivera
as Lady-in-Waiting to DuBarry
View All

The astonishing thing about Marie Antoinette is that, though it runs a full two hours and a half and is weighted down with over two million dollars worth of production, it is wonderfully absorbing to watch almost all of the time.

[Norma Shearer is] enough to make this dodgy, obese slab of prestige moviemaking turn into something sparkling and engaging.

This really should have been in color. The sets, wigs and costumes are almost impossibly lavish and are dazzling even in B&W. It's an enjoyable if questionably accurate historical account of Marie's rise and fall. Norma does well in the lead her occasional lapses into grandiosity are well suited to a queen and don't get in the way of her characterization like they often did in several of her other films and her smaller moments are well played.

Shearer stands out in this average historical movie.

So I LOVE the Coppola film and had to see it for comparison. I think some of the historical parts were romanticized and especially since the '35 Hays Act. Anyway, GLORIOUS costumes, fantastic acting by Shearer and in many ways a more heart-wrenching tale than the modern one. Still, I really loved it. One of those films I really wish had been in color... it would have been spectacular...

Finally, a film from 1938 worth championing! I've seen about 10 films as part of my study of 1938 Oscar-nominated movies, and "Marie Antoinette," starring Norma Shearer, is by far the best of the lot. The ironic thing is that it didn't even receive a nomination as Best Picture! Even more galling, it lost in all the categories for which it was nominated, including Best Actress (Shearer as the doomed queen), Supporting Actor (Robert Morley in his screen debut), and Best Score. W.S. Van Dyke, who had been nominated for Best Director in 1935 and 1937 (for "The Thin Man" and "San Francisco," respectively) was not nominated for "Marie Antoinette." It is a travesty that this film got such short shrift at the Oscars in 1938, a year when there was barely any competition. This was a gigantic MGM production, with a hundred extras and breathtaking costumes and sets. Like "Gone With the Wind," which MGM released the following year, the film has an intermission built right into the movie, breaking up its nearly three-hour running time. It also opens with a full overture while the screen is blank. MGM pulled out all the stops for this production, and the studio delivered in every way. The story is not quite as rich or fascinating as "Gone With the Wind," but it is engrossing, moving, and serious. The film opens in Vienna, with a young Antoinette being told that she will be married to the prince of France, a man whom she has never met. Shearer plays the character as deeply kind and effervescent, so she is instantly likable. Once in Paris, she has a terrible time establishing a bond with the semi-retarded Louis, but she tries very hard. When he shuts her out of his life, the princess immerses in party life and conspicuous luxury, mostly out of boredom and loneliness. When the prince becomes king, their relationship changes dramatically. But a love interest develops with another man nonetheless. He is played by the wooden but devastatingly beautiful Tyrone Power. Despite not having real acting skill, Power commands the screen in all the films I've seen him in. His eyes transfix you like a hypnotist's. Act II focuses exclusively on the Revolution, with one nail-biting sequence after another. The last 15 minutes are excruciating because of all the violence. After having spent 90 minutes getting to know the tender and gentle Louis and Antoinette, it is brutal watching them and their children become the victims of terrible violence. It was impressive for a big studio production to have the guts to end on a darkly realistic note. Perhaps that is the reason the film was so ill treated by the Academy. With war brewing in Europe in 1938, perhaps it was hard to rally around a film that took on a heavy topic and had a downbeat and frightening ending. Put "Marie Antoinette" on your list of 1930s films that deserve to be rediscovered. And kudos to MGM and W.S. Van Dyke for sticking to their guns and delivering a tough, intelligent picture.