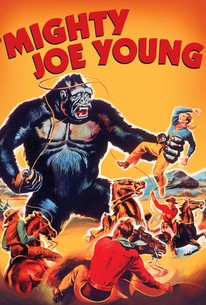 Hoping to make the magic of King Kong happen again, the production team of Merian C. Cooper and Ernest B. Schoedsack came up with the 1949 special-effects smorgasbord Mighty Joe Young. Robert Armstrong reprises his Kong portrayal of Carl Denham as hot-shot showbiz entrepreneur Max O'Hara. While in Africa looking for authentic decorations for his new night club, O'Hara makes the acquaintance of Mr. Joseph Young, a ten-foot-tall ape. Unlike King Kong, Joe Young has a heart of gold, thanks in great part to his owner, a lovely lass named Jill Young (Terry Moore). Against her better judgment, Jill allows O'Hara to bring Joe back to the States as a nightclub attraction. Joe proves to be a smash as he participates in Jill's musical act (he lifts her grand piano while she plays "Beautiful Dreamer") and performs a tug-of-war routine with an imposing lineup of professional wrestlers (including Tor Johnson, Man Mountain Dean and Primo Carnera). But when the patrons go home each night, Joe is unhappily relegated to his cage. When a group of obnoxious drunks begin teasing Joe, the disgruntled ape breaks loose and goes on a rampage. Slated to be put to death, Joe redeems himself by rescuing a group of screaming children from an orphanage fire. Featured in the cast are Ben Johnson as the nominal romantic lead, Frank McHugh as Robert Armstrong's assistant, and an uncredited Irene Ryan as a cocktail-lounge patron.

Mr. Joseph Young
as Himself

Ellen Corby
as Nurse at Orphanage

Irene Ryan
as Girl at the bar (uncredited)
View All

Between a lengthy chase and a devastating fire, the final half-hour delivers the goods, and Willis O'Brien (assisted by Ray Harryhausen) earned the Best Special Effects Oscar for his efforts.

Sure, we're never fooled into thinking Joe is a real gorilla, but we get an emotional performance nonetheless.

More of a historic novelty than an action film.

Though in the shadows of Kong it still brings back fond memories of how to make a special effect film back in the old days.

Great Willis O'Brien effects, a good story and fine cast. A wonderful fantasy, not as good as King Kong, but still fun to watch.

16 years after the world got a glimpse of the mighty 'King Kong', once again the sight of a huge gorilla amazed audiences around the world. In a completely different approach but sharing similar plot highs and lows 'Mighty Joe Young' rode on the success of Kong, unfortunately the film did not do as well but still managed to impress with better sharper special effects. Its not hard to see why this film may not have done so well really, I must admit to never really liking this film as it always did feel like a Kong rip off. The entire plot including many sequences are virtually scene for scene remakes of Kong. The main difference being in this film the huge gorilla is a pet of sorts to a female human, they both live in harmony in their native Africa and Joe is voluntarily handed over to the money grabbing businessman. Throughout the film the friendship between Joe and his female owner is never broken, she is always there to guide and help him. But this still doesn't really alter the fact the film follows very closely to Kong. Joe is brought to NY and used in a show, almost a gimmick, for the roaring crowds. In time he grows tired and angry of his daily grind, some drunken humans pester him, push him and he cracks, going (excuse the pun) ape shit and destroying the club. From this point on the film veers away from Kong and takes it own path. Naturally this path is pretty predictable and offers a sappy heroic crescendo for the ape, you do think the film will go the way of Kong, but uniquely it doesn't. This of course being a rather old film I can't really yak on about plot issues and silly ideas...but I'm gonna. The whole thing is fantasy of course but there are still daft plot ideas, the whole fact that Jill decides to allow Joe to go to New York to perform in a club is ridiculous, as if he would prefer that to roaming the wilds of his home country Africa. The actual club is gigantic!!! a feat of engineering in itself! plus the fact they have real wild animals in there behind glass seems a slight health n safety risk no? Should I mention how convenient it was for the escaping humans and Joe to just stumble across an orphanage that was burning down with lots of innocent little kids in desperate need of saving? nah. Yep this is a black n white film from the 40's so yes it will be incredibly corny with terrible acting (saying Ben Johnson, the male love interest, was wooden is an understatement), ludicrous plot moments, reckless use of real animals along with disregard for them in the plot (poor old lions) and that good old fashioned male chauvinism as the blokes go around merrily threatening the dames. As an upgraded sequel of sorts to Kong this film is great for the effects, Harryhausen's animation and Kong model constructor Marcel Delgado work wonders. The new gorilla model is a much slicker flashier piece showcasing more facial gestures and detail. Even to this day its amazing to see the switch from live action to the models as they interact together. As for the rest...well its a bit of a rehash really, nothing too special as we saw it all with Kong, so really it feels a bit late.

The original film of Mighty Joe Young, dating back to 1949. There are obvious differences when comparing to the later version, CGI, effects etc, but the general plot of the film remains the same. This version's Joe, does look a little 'Reet Petit', but I still feel that was good for the year it was made. An interesting watch, if only to see the evolution of an animated creature.

This was the best movie ever growing up, I must have watched it a 100 times on WPIX and WOR. If it was on I was watching it and to see it on DVD brought back enjoyable memories. A fantastic movie when you consider it was made in 1949 the special effects are incredible. About a young girl who is discovered with a gorilla, a very large gorilla and is brought to America for shows. Not as big or crazy as King Kong, but more enjoyable. The only disappointment in the film was near the end when the filmed turned an awful brown color, my guess original film was damaged, and that's a shame. I'm giving this one 5 stars how could I give it less. The commentary film was an added bonus.

An extremely bizarre movie that blends apes with cowboys. I really don't know what was going inside their minds when they thought that this would make a logical part III to King Kong (even though it's not really a sequel). It's kind've fun to watch because it's so corny and ridiculous.