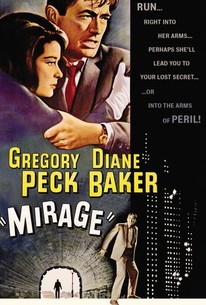 A dazed man, David Stillwell (Gregory Peck), wanders down the stairs of a New York skyscraper during a power blackout, only vaguely aware of who he is, where he's been, and why he has this nagging feeling that danger lurks all about him. Stillwell does know that many of the people in the building are acquainted with him -- and that he is somehow linked with the death of wealthy philanthropist Charles Calvin (Walter Abel), who has fallen 27 floors to his death (a special effect that was remarkable for its time). From this point onward, everyone Stillwell meets is connected with Calvin's death, or is in some way threatening Stillwell's well-being. When he seeks the help of Dr. Pepper-imbibing private eye Ted Caselle (Walter Matthau), he is told that "you don't want to remember" -- shortly before Caselle is murdered by persons unknown. Only the enigmatic Sheila (Diane Baker) evinces any real sympathy, and she too is part of the conspiracy aimed at silencing and/or neutralizing the dumbfounded Stillwell. Mirage has far too many twists of plot to go into here, but if you stay with it, everything is satisfactorily explained. Less than three years after its initial release, the black-and-white Mirage was remade in color as Jigsaw.

Mirage is the type of thriller where viewers only know as much (or as little) as the hero, meaning that the plot remains admirably dense for much of the running time.

Mirage has all the fascination of trying to put together a jigsaw puzzle without any idea of what the picture is going to look like when you're through.

... a well-executed suspenseful exercise in concealment and discovery.

A solid B-list thriller, with a great score by Quincy Jones, a typically wooden but effective performance from Gregory Peck, and a wonderful turn by Walter Matthau as a low rent private dick.

"mirage" is the amnesia-inspired suspense thriller upon the political theory of conspiracy. later on the 1968 "jigsaw" would another follower. this time our forgetful hero(or anti-hero) would be the serious-looking gregory peck. peck is a wondering wanderer who suddenly is striken with the conscious that he has no clue about what he has done in these two years, and he only senses that someone is chasing behind him for something from him which he has no idea about. then to discover the truth of the matters, he seeks help from a detective(walter matthau) who runs a office called "aaa" just becuz of its convenience to be listed as the first capital name on advertisement. then he encounters his alledged former love interest who attempts to persuade him into dropping off the quest of his identity....little by little, peck recovers from the mental shock effect which would cause him compulsively to blank out his memories that he accidentally induces the death of some peace activist who turns into philistine bussinessman whom he reveres deeply. this flick has the simulated aura of the 2000s "momento" which is based on another more complicated mental disease "short-term repeated memories" which is comically applied also in drew barrymore's "50 first dates"...."mirage" is a quaint piece which might be the pioneer to inspire the consequent flicks on the theme of amnesia.....but be relieved, this flick is better than peck's 40s collaboration with hitchcock "spellbound"...it lacks the melodramaticity of "spellbound", and it's surrounded with the nihilistic atmosphere of existentialism in kafka's novellas, but it would probably be better if the lead was played by someone who emits more flexible frailty and dubious ambituity than the straight-faced gregory peck who is literarily the typecasting of hero on the side of justice.