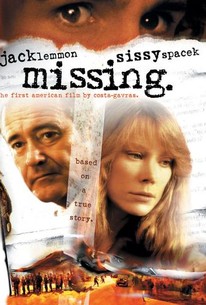 Critics Consensus: Thanks in large part to strong performances by Sissy Spacek and Jack Lemmon, Missing is both a gripping character exploration and an effective political thriller.

Critics Consensus: Thanks in large part to strong performances by Sissy Spacek and Jack Lemmon, Missing is both a gripping character exploration and an effective political thriller.

Critic Consensus: Thanks in large part to strong performances by Sissy Spacek and Jack Lemmon, Missing is both a gripping character exploration and an effective political thriller.

Costa-Gavras's tense political drama opens in an unspecified South American country (though clearly intended to be Chile) in the throes of a military coup. American activist Charles Horman (John Shea), who has been a thorn in the side of the country's military ever since his arrival, suddenly disappears. In trying to find out what has happened, his wife Beth (Sissy Spacek) is stonewalled, not only by the ruling junta but by the American consulate. His father, staunchly patriotic Ed Horman (Jack Lemmon), joins Beth in her search. Ed and his daughter-in-law have never seen eye to eye politically, and he refuses to entertain the notion that his son's disappearance might be part of a larger conspiracy or cover-up. But as the days grow into weeks, Ed comes to the shattering conclusion that he and his family have been betrayed by the American government, on behalf of the "friendly" South American dictator who holds his people in a grip of iron. Adapted by Costa-Gavras and Donald E. Stewart from a book by Thomas Hauser, Missing was inspired by the true story of the late Charles Horman. In spite of (or perhaps because of) condemnation from certain high-ranking officials in the Reagan administration, the film went on to win an Academy Award for Best Adapted Screenplay, as well as nominations for Best Picture, Best Actor, and Best Actress.

Richard Venture
as US Ambassador

Lynda Spheeris
as Woman in US Embassy

Joe I. Tompkins
as Marine Officer

John Fenton
as Carlos
View All

A story that could have made for a brisk jeremiad on 60 Minutes is stretched to 122 minutes of heroes fuming and villains purring their oleaginous apologies. Spacek and Lemmon, an appealing sweet-and-sour combo, sink in the swamp of good intentions.

Lemmon is superior as a man facing up to issues he never wanted to confront personally.

Spacek and Lemmon are fine as the missing man's wife and father, but what makes the film so overwhelming in places is its unending night-time imagery of a society coming apart at the seams.

This movie might have really been powerful, if it could have gotten out of its own way.

Among other things Missing does is to convince you that, next time, you're not going to waste your vote. The passive citizen is the citizen-victim.

A fascinating story that is all the more frightening because it actually happened.

By focusing on the father-son relationship, Costa-Gavras gives his audience an excuse to ignore the politics -- much as Lemmon himself does.

Thanks to Jack Lemmon's magnificent performance, this historical information turns into a thrilling story that doesn't allows us to be indifferent. [Full Review in Spanish]

It's an extraordinary real life story brought to life by exceptional film-making and committed acting.

Still relevant 34 years after its release and 43 years after the events it depicts. [Full review in Portuguese.]

Incredible performances by Jack Lemon and Sissy Spacek under Gavras' strong direction make this not much remembered film worthwhile.

A thoughtful, sad docu-drama about the true story of an American father searching for his left-wing son who went missing during the Chilean coup d'état of '73. The pace and production is very late 70s / early 80s, but the story absorbs you into the journey the characters undertake.

Well-made and engaging. We had to watch this in High School and I enjoyed it.