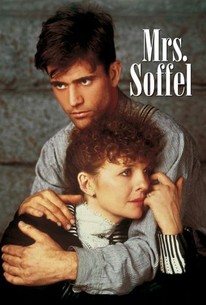 Based on a true story, Mrs. Soffel is set in Pittsburgh near the dawn of the 20th century. Peter Soffel (Edward Herrmann) is the warden of a top security prison, and his wife Kate (Diane Keaton) often comes by to read the Bible aloud to the inmates, despite her fragile health. While making her rounds, she makes the acquaintance of the Biddle Brothers, Ed (Mel Gibson) and Jack (Matthew Modine), who are sentenced to death for murder and robbery. Ed has become something of a celebrity thanks to his letter-writing campaign, in which he appeals in the letter-to-the-editor columns of the popular press to stay the execution of his brother and himself. His good looks, intelligence, and charm make a strong impression on Kate, whose marriage offers her little excitement. In time, Kate finds herself falling in love with Ed, and she discovers that she's unexpectedly receptive to his suggestion that she help him escape. Mrs. Soffel was the first American film from noted Australian filmmaker Gillian Armstrong.

In "Mrs. Soffel," director Gillian Armstrong is so enthralled with her feminist message that she never lets her story breathe.

didn't for one moment convince me that these were real people, acting from the bottom of their hearts.

a very strange and maddening movie, being a fascinating tale that's nowhere as provocative as it first promises to be and as the reputations of everyone connected with it might lead you to expect.

An unusual love story and a religious film about grace and forgiveness.

The outcome is predictable, and the prospectively livelier second half never breaks free from the torpor of the prison scenes.

True stories don't get much steamier.

I saw this Movie very long time ago. I was so fascinated of the movie. It is tiny bit dark for my test.