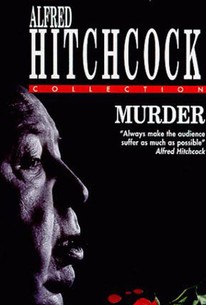 Creaky, formative Hitchcock concerns the director's No. 1 cinematic preoccupation: guilt and innocence. A juror (Herbert Marshall) who helped convict a young actress (Norah Baring) of murder has second thoughts and sets out to find the real culprit, The story unfolds in basic '30s whodunit fashion. What's important are the glimpses of Hitch's emerging style: the shadow of a noose on a prison wall, a circus suicide.

It remains a crucial insight into the development of one of the cinema's greatest artists, and so, essential viewing.

Well photographed and mounted, it contains all the gadgets of the pet Alfred Hitchcock technique, from quick cutting to skillful dialog blending.

Perhaps the most provocative of all early British Hitchcocks.

An intelligent, well-acted and thoroughly entertaining motion picture in the routine pattern of mystery thrillers.

Hitchcock's moments justify themselves. Obviously Murder had its moments. It may not achieve real unity, but it comes nearer than any of its homemade competitors.

It's almost as though Hitchcock is having us all on, deliberately testing his audience's willingness to continue watching filmed play about people who cannot stop acting like their life is a theatrical construction.

A strange civilian policier-cum-whodunit, Hitchcock seems bored by his material...

Hitchcock's tenth feature, a crime drama set in the theater, is one of his best British films, featuring Herbert Marshall in his first speaking part and a new kind of villain.

An atypical Hitchcock film which depends on the element of surprise rather than his usual building of suspense.

It's enjoyable on its own terms, but is a far cry from Hitch's better films.

This early Hitch effort concerns a juror who, after originally deciding to vote guilty in a trial of a woman accused of murder, has seconds thoguhts about his decision and decides to investigate the case on his own, trying to get something done before the execution can be carried on. Even though the plot isn't really ss great as it coiuld have been, or as gripping and involving, I wasn't completely bored, just underwhelmed. he film does have some okay music though, and some actually pretty good camera work and cinematography, good editing, and okay set design. All in all, I think had I not seen so many other film before this one I'd have been more on it's wavelength, but I do have this to say about all of Hitch's early films: no matter how each fares individually, all of them are worthy when looked at as a whole since they give a neat look at the evolution of a filmmaker in his formative years who would end up becoimg one of the greatest, most important, and influential directors of all time.

Not one of Hitchcock's best movies, kind of boring.

Certainly a well worn piece in terms of hard wearing film. For me this film is saved by the ending which I felt was wrapped up nicely, but was a little bored throughout.