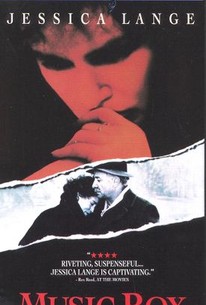 Jessica Lange plays an attorney whose affable Hungarian-immigrant father Armin Mueller-Stahl is arrested. He is threatened with deportation for lying about his activities during World War II; part of the charge is that Mueller-Stahl was a Nazi collaborationist, guilty of wartime atrocities. Absolutely convinced that her father is being railroaded by a revenge-seeking Hungarian communist government, Lange handles Mueller-Stahl's defense, expertly blowing huge holes in prosecuting attorney Frederic Forrest's case. But in doing her own research, Lange discovers that her father has spent a lifetime paying off a blackmailer. Why? In contrast to the fervency of his earlier Z, Costa-Gavras refuses to make things easy by proselytizing in The Music Box (nor does screenwriter Joe Esterhas indulge in his usual right-between-the-eyes fervency). Everything in the film is offered on the same calm, collected level, making the ultimate horror of the story all the more effective.

Zoltan Gera
as Man in Budapest

Nicholas Christianson
as Boy with Mikey

Lange without angst is like Tyson without punch. She's the era's Sarah Bernhardt, a tragedienne with soignee soul. In Music Box... Lange is at her furrowed-brow best.

What I particularly disliked about Music Box is that it takes the easy way out. It is not about guilt or innocence; it is a courtroom thriller, with all of the usual automatic devices like last-minute evidence and surprise witnesses.

Crafted with precision and compassion, Music Box is an emotional time bomb planted in the human heart.

It breathes a bit when Mueller-Stahl is on screen, but the rest of the time it is buried beneath mountains of standard courtoom-melodrama cliches.

...a stand-alone example of a full-bodied courtroom drama.

Failed to be affecting.

The script by Hollywood's controversial writer Joe Eszterhas is strictly edge of the seat material.

Armin Mueller Stahl is fantastic as the man who may or may not have had a despicable past. The reveal is the highlight of the film. Lange was Oscar nominated but she has done better.

Not sure how I came across this movie to put on my list but I am glad I did/ Armin Muller-Stahl plays as usual an excellent part of a father who is accused of WWII war crimes. Living in the United Sates he is faced with being sent back to Hungary. Jessica Lange plays the daughter who is a lawyer and has decided to defend her father. Why Jessica Lange is not listed in the cast on this page is beyond me, another Flixster goof? A twist at the end, that I will not give away, but that all can see coming after about the 1st hr. Even though Jessica was awarded a Oscar for her performance, I can't give more then 3 1/2 stars, that doesn't mean this film is not worth watching at least once. If your a WWII Buff you might rate it higher

Yet another boring 80s courtroom drama with wooden acting, which fails to make me care about the characters or bring any suspense to the case.

a little slow moving but fine acting and a good story make it worthwhile.