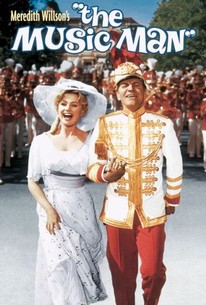 After nearly 900 performances on stage, the hit Broadway musical and play The Music Man comes to the big screen. Harold Hill (Robert Preston) is a traveling con man who lands in River City, Iowa in the year 1912. He alerts the town to the evils of the poolhall and the potential to corrupt the town's youth. The solution is to form a musical band and put musical instruments instead of pool cues in the hands of the moppets. He convinces the townsfolk to give him plenty of money to buy marching band uniforms and musical merchandise. He meets fellow con man Marcellus Washburn (Buddy Hackett) who aids in the scheme. Marian Paroo (Shirley Jones) is the local librarian suspicious of Harold's motives. Harold doesn't know a thing about music, but has a system where wishing will make it so. Hill is almost whisked off to jail when a fellow con man warns Marian of the possible scam. Hill also does nothing to endear himself to Mayor Shinn (Paul Ford) who happens to own the pool hall of such disrepute. The Music Man is a colorful slice of nostalgic Americana and the song and dance film was nominated for Best Picture. Ray Heindorf won an Oscar for his musical direction. Memorable songs from the production include the finale "76 Trombones", "Till There Was You" and "Gary, Indiana." In one of the most glaring omissions by the Motion Picture Academy, Preston was not even nominated for his brilliant, memorable performance. This role marked one of the many highlight of his long and distinguished career, and his name is synonymous with the film. The classic was produced and directed by Morton DaCosta, who performed in similar capacity on the stage play.

Ewart Dunlop
as The Buffalo Bill

Oliver Hix
as The Buffalo Bill

Jacey Squires
as The Buffalo Bill

Olin Britt
as The Buffalo Bill

Percy Helton
as Conductor
View All

Critic Reviews for The Music Man

A treat to re-watch, almost 50 years from its original production date.

The music is glorious, but as a movie, this is a photographed play, a nostalgic evocation of small-town American that was congruent with Kennedy's New Frontier; within a year, though, Kennedy would be assassinated and the optimistic mood would vanish

One of the most obnoxious musicals ever to be staged for movie cameras.

Robert Preston is note-perfect in a bright musical even non-fans of the genre will enjoy.

Too stagey and too gooey, but it preserves Preston's classic performance

Robert Preston shines in one of the sunniest ol' musical classics under the sun.

reminds of that good old down-home attitude of the Midwest

Audience Reviews for The Music Man

A con man comes to a small town to form a Boys' Band, but he falls in love with the local librarian. They simply don't make films with this kind of energy any more, which is a good and bad thing. The Music Man, if written today, would more fully explore the ethical questions associated with protagonist Harold Hill's profession, which is appropriate, but Hill's charm in the person of Robert Preston is infectious and fun and makes all ethical quandaries seem like departures from the fun. All of the musical numbers are scat-style super, and the production design shows of the choreography and high-scale - a scale so high that we wonder where all these people come from. Overall, The Music Man defies logic and modern story-telling, but that doesn't mean it doesn't have its charm.

One of a kind film. It really showed what music can do to people.

Meredith Wilson's sparkling filmization of the landmark Broadway musical about a traveling con artist salesman and the small town he dupes. Rousing Americana's best asset is Robert Preston's memorable performance as Professor Harold Hill. His sunny portrayal brightens every scene he's in. Virtually one musical number after another, there are moments of the sublime ("Seventy-Six Trombones", "Till There Was You") and the expendable ("Gary, Indiana"). The latter contributes to film's almost unbearable 151 minute running time. A bit of editing and perhaps a less stagebound production would have made this a near-perfect adaptation. Nevertheless those minor infractions are far outweighed by the joyous singing and dancing that is on display in this most appealing musical.

while i love the story, some of the music was a bit bland and i didnt believe the love story between preston and jones much. preston did almost too well playing the slimey traveling salesman to believe his redemption would come so quickly, even with the very beautiful shirley jones at the root of it. over all this is a wonderful classic that is expertly acted and fun to watch.