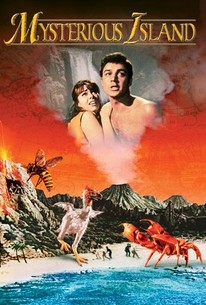 Filmed at least nine times over the last nine decades, Jules Verne's Mysterious Island received its most popular picturization in the hands of producer Charles Schneer, director Cy Endfield and special-effects maestro Ray Harryhausen. During the Civil War, several P.O.W.s led by Gary Merrill escape from a southern stockade in a huge observation balloon. Buffeted about by a violent storm, the balloon lands on an unchartered island somewhere near New Zealand. The fugitives soon discover that this is no ordinary desert isle, especially after being attacked by a giant-sized crab. Joined by a pair of shipwrecked British gentlewomen (Joan Greenwood and Beth Rogan), the castaways find evidence that the island has been previously inhabited-and that they're all being watched. Sure enough, it turns out that the island is the domain of Captain Nemo (Herbert Lom), skipper of the futuristic underwater vessel Nautilus. Having failed to end all wars by blasting battleships out of the sea, Nemo is now experimenting with new means of ending starvation in the world: hence the outsized crabs and birds that the castaways have confronted. Before Nemo can spread his goodwill elsewhere, he is destroyed by the island's volcano, while the others manage to escape in the Nautilus. As in 1957's 7th Voyage of Sinbad, the combination of Ray Harryhausen and musical composer Bernard Herrmann is unbeatable; otherwise, Mysterious Island tends to slow to a halt in-between its spectacular special-effects highlights. -- (C) Rovi

{A} still very watchable film, one of the superior adaptations of Verne's book

Director Cy Endfield takes the reigns on this big budget spectacle which tends to suffer from a bout of sequel-itis as regards the bombastic fervor of gigantic, menacing creatures taking precedence over characterization or narrative energy.

Amusingly, human pirates provide grimmer antagonists than the colossal flora and fauna, though a detracting element of the film is an overabundance of players.

...a wonderful piece of sci-fi/fantasy with solid acting, a crackerjack script, and otherwise timeless Harryhausen wonder.

Allows Ray Harryhausen to showcase some superb stop-motion animation effects and the great Bernard Herrmann (Citizen Kane, Psycho, The 7th Voyage of Sinbad) to add another smashing score to his resume.

A peppy film, helped along considerably by the inherent eye candy that comes along with setting a film in the Pacific... Harryhausen at his best.

Watchable only because of the terrific stop-motion animation of Ray Harryhausen.

Pretty cool adventure yarn as Union soldiers escape from a Confederate prison only to wind up on a Pacific island filled with oversized beasts, ala Ray Harryhausen. It's man against the elements with some monsters thrown in, the very stuff of teenage fantasy. Oh wait! And here comes a shipwreck with two babes! Just thrilling! Just thrilling I say! Old school sci-fi that leaves you wanting more. And Joan Greenwood.

More high seas high jinx from Jules Verne with this sequel of two previous seabound adventures. Unfortunately this film isn't really too accurate with the source material but still keeps hold of a few major ideas. The story idea is ripe for utilizing Harryhausen's skills but I don't believe any of his large creations actually feature in the original novel? may be wrong. The film/story has a familiar theme which...dare I say reminded me of 'The Wizard of Oz'. A group of northern US (Yankee) soldiers escape from a Confederate prison using a hot air balloon as their getaway vehicle. Once up in the air they enter into a huge nasty storm which carries them off uncontrollably into the unknown, that's the 'Oz' theme right there. In time they spot land and crash down into the sea, welcome to the mysterious island. Despite being one of Harryhausen's films this probably has the least amount of his work in a film. I'm not surprised seeing as everything he creates for the film didn't appear in the novel (I believe). That in mind you still can't deny how awesome the simple creatures are, the first that rears its head is a gigantic orange crab. Easily the best sequence in the film as the crab looks stunningly realistic in both visuals and movement. I guarantee just seeing images of this sequence will have you drooling to see the film...for fans of the genre. After that it gets a bit sparse really, Harryhausen wise. The film plays out like a 'Swiss Family Robinson/Robinson Crusoe' type affair, it has all the regular desert island motives and visual concepts you would come to expect. In all honesty after a great start and with the whole notion being so cool the film does become a little drab in the middle. Although the acting from all the cast is actually pretty good this time round. Joan Greenwood and her husky voice is the perfect English lady, Gary Merrill is a likeable all round regular Joe whilst Michael Craig plays the good looking no nonsense Captain. Kudos to Herbert Lom as 'Nemo', despite looking like a 'Bond' villain with his odd silvery white hairdo he's easily one of the best 'Nemo's' alongside James Mason. One thing I still don't get (in this film anyway) is the hot air balloon escape. One of the men in the balloon knows how to fly it, yet they still allow themselves to be blown away. He mentions how he knows how to land the balloon so why on earth didn't they land earlier? it seems they could of done what they wanted at any point, but they choose to float or drift off in the storm. Anyway apart from the mighty crab sequence we don't get too much Harryhausen awesomeness. There is a nice small gigantic bumblebee sequence which again looks tremendous but you feel they could of done more with it, seems restrained. The last monster sized creature worth mentioning is the (again small) colossal cephalopod under the sea sequence which does seem to have been stuffed in there to maximize on the Nemo angle in the story. Not sure if its in the original novel but does this kind of beastie ever fail to win? no, no it doesn't, its always a thumbs up for giant sea monsters. In all brutal honesty I was slightly disappointed with this film as I expected there to be tonnes of oversized creature madness. I've not read the novel and only ever seen snippets and images from this film which always looked so fudging cool (big crab! big crab!!). Unfortunately the film isn't quite as excellent as hoped. Its not a bad film, although the matte painting against live action effects are very ropy, but it just doesn't quite feel as fantastic as it could of been. I think I may be letting other fantasy films of the time influence me too much, but it is quite Harryhausen-lite and lacking some much needed excitement at times. But visually its very pleasing to the eye.

Mysterious Island is one of Ray Harryhausen's best movies. The stop-motion monsters in this movie are magnificent, especially the giant bees in the honycomb. The cast includes Herbert Lom as Captain Nemo and he and the others all play excellent parts. Bernard Herrman's music score is excellent and it may be his best. The island where they get stranded is in the South Seas, so you would expect monsters. This movie is a must for all monster movie and Ray Harryhausen fans.