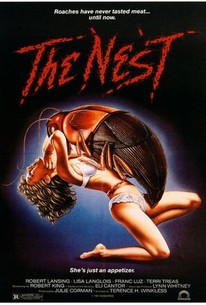 A science project goes awry and the world is threatened by giant cockroaches in this horror outing.

Jeff Winkless
as Church
View All

Critic Reviews for The Nest

It's no masterpiece, but the gore and makeup effects make it worthy of a viewing.

Fits like an old comfortable shoe, albeit one with rotting roach meat in the toe.

An enjoyable B movie about killing roaches.

There's not much to distinguish it, except, of course, for the bugs. Oh, how marvelously effective the bug scenes are!

Audience Reviews for The Nest

Richard Tarbell (Franc Luz) plays the local Sheriff on a small island just off the coast of California called North Port. He is dating a waitress who works in the local diner. However, his ex and Mayor Elias Johnson's (Robert Lansing) daughter Elizabeth (Lisa Langlois) flies back into town. It turns out the Mayor has allowed a company called 'INTEC' and Dr. Morgan Hubbard (Terri Treas) to conduct genetic experiments, the purpose of which are to create the ultimate pest control that doesn't use pesticides or sprays, genetically altered cockroaches that are supposed to eat other roaches, although it's never explained how these roaches themselves would be controlled, maybe no one thought about that small point. Unfortunately these roaches eat everything else as well. First turning cats and dogs into skinless carcasses, eating all the meat from the local store and all the glue that binds the books together in the public library! They seem to be everywhere and the local exterminator Homer (Stephen Davis) can't cope. The Mayor summons Hubbard from 'INTEC' and demands she stops her work. They soon discover that these genetically created roaches mutate from generation to generation and are starting to become resistant to all scientific attempts to destroy them, and start to become disgusting hybrids of themselves and what they've eaten. Hubbard convinces Mayor Johnson that she can destroy the roaches, and prevents him from evacuating the town at the expense of wild hysteria even though the entire town has been eaten by the roaches except sheriff Tarbell, the Mayor, Dr. Hubbard, Elizabeth and Homer, but he has already ordered the chemical spraying of the town, fearing the roaches will spread to the mainland, with a lethal dose of poison that would also be fatal to any person still left on the island, and they need to turn the lighthouse on to cancel it, but predictably the light doesn't work. So the remaining survivors must either stop or face both mutant killer cockroaches and a lethal dose of chemical poison! They must find the roaches nest and destroy the queen before it's too late. Directed by Terence H. Winkless this is a decent, solid effort. The script by Robert King based on a novel by Eli Cantor is a bit on the talky side, and the sub-plot involving the suicide of Elizabeth's mother goes nowhere and is totally unnecessary and irrelevant. Why, when they find the nest, does it contain a box with loads of explosives and a timer? Where did it come from? Not the sort of thing you just leave lying around. There is also a bizarre scene toward the end, sheriff Tarbell and Homer are sat in a car discussing the queen and what they might find when they enter the roaches nest, half way through their conversation the sheriff pulls his gun out points it at the dashboard and fires a shot off. Why does he shoot the dashboard when he was in the middle of a perfectly calm conversation with someone? Why waste a bullet when earlier on he had seen what a couple of the mutant roaches had become? Why not save the bullet to protect himself against anything he might find in the nest? I haven't got a clue and I can't think of a reasonable explanation, the scene still baffles me! The effects are variable, there's one or two good gore scenes, mostly involving skinned animals and mutilated corpses. When a mutant half roach/half whatever it's eaten shows up the special effects are less successful. Their just really stiff and lifeless puppets with one operator on each arm, they have almost no movement whatsoever. Although the human to mutant roach transformation sequence is quite gooey and gross looking. For what it's worth the video released by MGM in the UK has a shot from this sequence on the cover of the box that doesn't actually appear in the finished film, it was probably never included in any released version but proves that more footage of this was shot. Hubbard's death at the hands of her own creation at the end also contains pleasing amounts of slime, gore, blood and a giant monster consisting of a mass of body parts from various humans and animals. Acting, photography, and music are all OK but nothing exceptional, professional enough. Decent horror film, just a little dull and silly in places. Worth a rent for horror fans, or even better watch it on T.V. if it's on, for free.