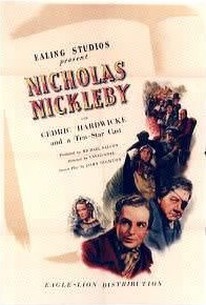 Nineteenth century England. When Nicholas Nickleby's father dies and leaves his family destitute, his uncle, the greedy moneylender, Ralph Nickleby, finds Nicholas a job teaching in a repulsive school in Yorkshire. Nicholas flees the school taking with him one of the persecuted boys, Smike, and they join a troop of actors. Nicholas then has to protect Smike, while trying to stop his Uncle Ralph taking advantage of his sister Kate, and later his sweetheart, Madeline Bray, whose father is in debtors prison.

Cavalcanti's adaptation is elegant, atmospheric and successfully captures the author's skewering of corrupt, inhuman social types and the society that breeds them.

Director and adaptor have only partially succeeded in the conjurer's task of getting a quart into a pint pot; and Dickens has proved too generous a creator to be squeezed into 108 minutes of screen time.

There are no featured audience reviews yet. Click the link below to see what others say about Nicholas Nickleby!