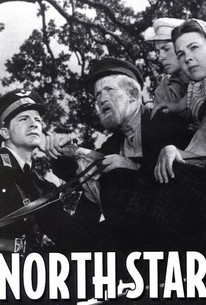 In this bit of WWII propaganda (designed to boost support of America's alliance with Russia against Germany), Kolya (Dana Andrews), Kurin (Walter Huston), Damian (Farley Granger), and Marina (Anne Baxter) are members of a farming collective in the Ukraine known as the North Star. The hard-working but happy members of the North Star find their way of life shattered when Germany, in defiance of previous treaties, storms the nation and begins a brutal occupation. Dr. Otto Von Harden (Erich Von Stroheim) begins gathering children -- who are to be used for blood transfusions and medical experiments. Many of the outraged farmers take to the hills to fight with the anti-Nazi resistance, while those who stay behind bravely destroy precious crops and materiel rather than turn them over to the Nazi war machine. Producer Samuel Goldwyn made The North Star at the request of President Franklin D. Roosevelt (whose son James was an executive at Goldwyn's studio). Ironically, several members of the film's creative team (including screenwriter Lilian Hellman) later found their motivations for making the film questioned by the House Un-American Activities Committee, who declared it Communist propaganda. ~ Mark Deming, Rovi

Grace Lenard
as Woman on Bridge

John Bagni
as Guard at Desk

A prime example of how Hollywood reflected the changing political climate: When Lewis Milestone's film was made, the Soviet Union was an ally but after WWII some of its makers removed their name, while others like writer Lilian Hellman were blacklisted.

There are no featured audience reviews yet. Click the link below to see what others say about The North Star (Armored Attack)!