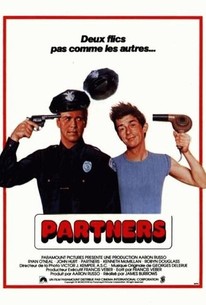 TV director James Burrows made his feature debut with this unusual film that's a situation comedy-style twist on both The Odd Couple (1968) and Cruising (1980). The murder of a male model in a gay, beachfront enclave of L.A. warrants an undercover investigation, so police officer Benson (Ryan O'Neal), a straight, macho, law-and-order type, is assigned to partner with file clerk Kerwin (John Hurt), a mild-mannered homosexual. Benson and Kerwin are to pose as a gay couple who have just moved to the area. At first, Benson's slovenly ways drive the fussy Kerwin to distraction, while Kerwin's sexual orientation and prissy manners are a source of constant frustration for straight-arrow Benson. However, the two eventually become friendly roommates, if not exactly friends, and Benson even begins to see the world through Kerwin's eyes. Although he carries a badge, the fussy Kerwin is essentially a civilian, but as he and Benson close in on the murderer, Kerwin reveals himself to be a far more capable cop than Benson assumes him to be. Partners was written by Francis Veber, author of La Cage aux Folles (1978) and The Man with One Red Shoe (1985).

Gregory Hodal
as Cop
View All

Too little and too late in the game for this kind of stuff.

There are no featured audience reviews yet. Click the link below to see what others say about Partners!